Here are two poems from back around 1999. Neither of them has a reason to exist any more (in French that's raison d'etre), but I still like them, and what better place to put outdated poetry than a blog?

The Lit'rate Snob comes from when the Wash Post bundled all their Sunday color stuff in the same bag; it came separately, with the comics wrapped around the whole thing. Inside were the color ads, the TV section, the Magazine, and Book World. And every once in a while a letter to the editor would appear in the Post complaining about having to wade through all the other color stuff to get to Book World, like the letter writer couldn't bear to touch the comics on his or her way to the book reviews. So I drew this thing. See? It's hard-hitting material like this, and my willingness to go after issues that no one else will touch, that got me my Pulitzer. 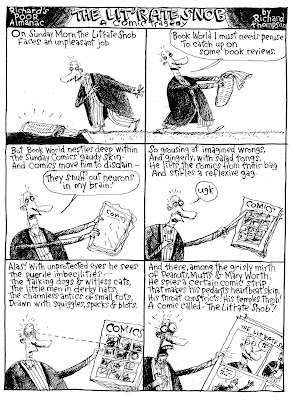 This one comes from our misguided fear that when the year changed over to 2000 all our computers & electronics would be confused and everything would collapse. Ha ha! We were such dummies! But I knew better! 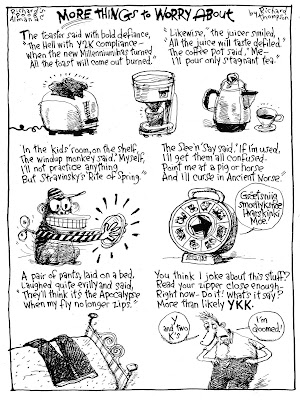 Hope you enjoyed them. Someday I'll post my 250 page epic graphic poem about the rescue of all those dentistry students in Granada.
Posted by richardcthompson at 9:22 AM