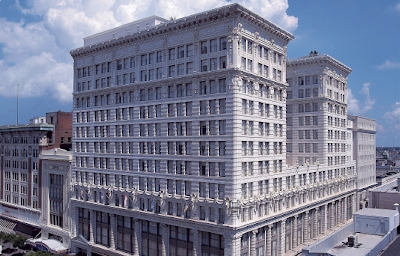 This coming weekend is the National Cartoonists Society's annual Reuben Award Convention Thing, and guess who gets to go? Well, lots of people, but one of them is me. It's in New Orleans this time, at the Ritz Carlton in the French Quarter no less (see photo above). I've never been to New Orleans, so I'm really looking forward to it. To get there I'll board the Crescent Express, an Amtrak train that takes about 26 hours to reach the City That Care Forgot (so called by Mark Twain). I'm taking a book, or maybe a whole bookcase.

I'm attending this year's Reubens because I'm up for an award. Every year the NCS bestows a Reuben Award, named after Rube Goldberg, on the Cartoonist of the Year. I'm not up for that, I'm up for one of the division awards, the division being "Newspaper Strips". Here's the full list of divisions and nominees, and here's the list of those up for Cartoonist of the Year. I'm up against Paul Gilligan of Pooch Cafe and Jim Meddick of Monty, both strips I like a lot. It'll be an interesting and a fun trip, even for a stick-in-the-mud antisocial guy like me who never leaves the house much except by astral projection. 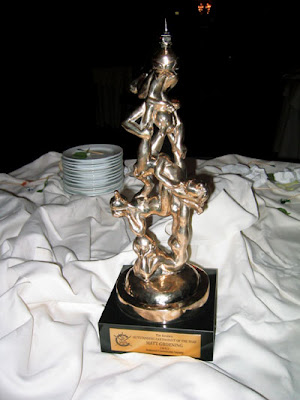 Above is a photo of an actual Reuben Award, as designed by Rube Goldberg (it looks like it comes with a set of dinner plates, too). Originally it was to be a lamp, but it was converted into a trophy. Kind of a pity because it'd be a great lamp, especially if there was one on either side of a very ugly sofa.

So I won't have much to say here for a while, though a bit later I'll add the story of the only other time I went to a Reubens thing, back in '96, and how my rental tuxedo pants didn't fit. 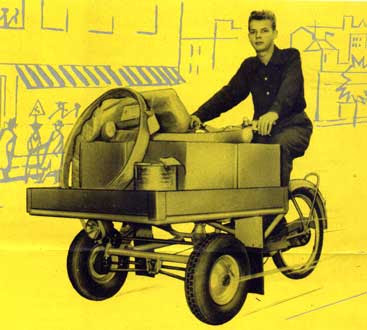 Above is a photo I found on Google Images under "Crescent Express", which worries me. I don't think I can sit on that thing for 26 hours.
Posted by richardcthompson at 9:37 PM

Actually, there is a parade scheduled for Sunday. I have no idea what it'll look like. Throw me something! And, thanks, htgt.

Anybody who went to the Clarendon Neighborhood Day Parade last week would've seen the old Godzilla float, making it's return. They'd also have seen my daughter & some of her friends riding in my brother's truck

Good luck, Richard! I voted for you!
I'm not going to the convention this year as I'm saving money to go to the UK next month and I wasn't looking forward to explaining to my wife why it was necessary for me to go to New Orleans and drink for three days in the Ritz. Visited there a couple times pre-Katrina, definitely ride a streetcar, House of Blues is fun (awesome artwork on the walls). Try not to step near the gutters on Bourbon Street (unless you're there in the morning after the street crew has finished hosing them down). I hope you win a well-deserved Reuben (statue, not sandwich).

Regardless of whether you win, you should ask Jim Meddick what happened to Robotman. It's an interesting story; it involves aliens and Bill Watterson.

It's just Crescent, no "Express" -- as evidenced by the fact that it takes 26 hours to get from Washington to New Orleans.

Best of luck! I'm pulling for you man!

Good luck, Richard! Whoever wins, it'll be a good strip. Trains are now my favorite way to travel--you can walk around, grab a beer or four, you get grown-up sized seats, conductors in three-piece suits and everything!

But when they say, "All aboard!" you want to step lively, because they don't wait around for anybody!

Thanks very much to all of you! For your good wishes and for the train information. I'll see you all next week.

Best of luck! Got my fingers crossed for you. I've loved Meddick's work for years, but I think you deserve it more (but don't tell HIM that).
Hope to hear good news next week!