According to the alert historians at the Janus Museum , May 14th is National Folksong Day. Since it's never to late too celebrate anything, here are a few folksongs to learn and share with your friends, especially if you own a guitar and have no real talent for music.

I used to ride the Metro a lot, especially when I lived up in Gaithersburg at the end of the Red Line, which means that I used to doze off on the Metro a lot. I never missed my stop because of dozing, though I had a number of near-misses. One night after I exited the midnight train at the Shady Grove station (the last on the Red Line), I was walking along the platform, watching the now-empty train sliding past into the trainyard beyond, and in one car sat a very startled woman who looked sure that she'd be spending a long night on an orange Metro bench. I doubt she did; the conductors usually walked the length of the train before pulling into the yard and someone would find her at some point. But all I could think as she slid past was, glad that's not me. I thought about waving to her but didn't, and I'm glad, as it probably wouldn't have cheered her up any. 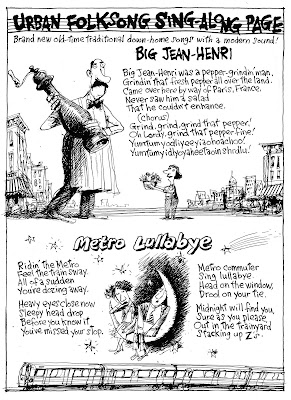 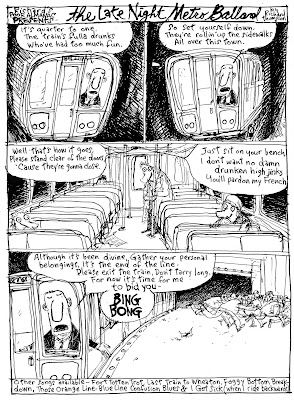 Posted by richardcthompson at 9:27 AM

These are great, but I'm waiting for Hendrix to cover them.

Folk was so yesterday. Make way for rock 'n' roll!

Did you have a melody in mind for the Late Night Metro Ballad? I'm wanting to sing it to the Sinatra song "One for my Baby and One More for the Road," but it doesn't quite work.

Say, did you know that those hugeous pepper grinders are called Rubirosas? They're named after the fabled '50s playboy Porfirio Rubirosa, who had, according to legend, an absolutely enormous, umm, pepper grinder, if you know what I mean.

Kid, I've heard of this "rock'n'roll", it's like a thing the kids are doing, yes? With the hair and the clothes and the yeah yeah music?

Rob, I didn't really have a tune in mind, and this is more Sinatra than folk I guess. It needs a new melody, something snappy yet deptressing.

Ponto, your polymathism scares me sometimes.