Anything you need to ask in 140 characters or less, well, now's your chance! Please, no answers requiring words of 9 or more characters or the letters Q, Z, M, Ø or Ç.
Posted by richardcthompson at 10:41 AM 2 comments:

Labels: please use only words with Anglo-Saxon roots

I'm happy to hear that Cicadas, these from Brood II, are popping up in the area, because this blog deals mostly in repeats and I've got some old Poor Almanacs just full of Cicadas! They all date from 2004, when the most recent infestation of the 17-year variety erupted in the East.

And here's an early CdS with a cicada theme. it was redrawn for syndication and reused.  Who knew cicadas were such comedy goldmines? I hope they come back more often! 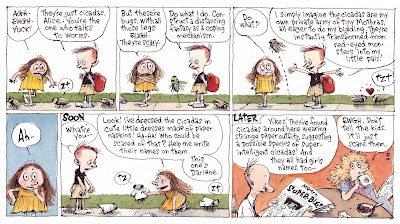 Posted by richardcthompson at 3:14 PM 2 comments:

Who Wants a Copy of Richard's Poor Almanac? 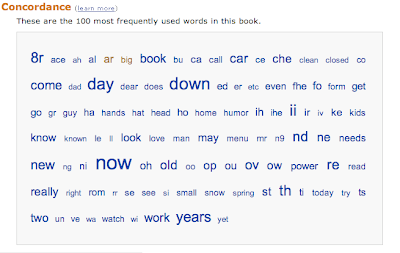 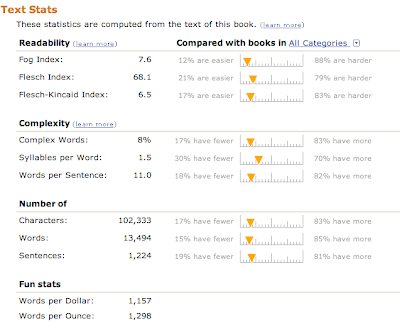 The statistics above are provided by Amazon.com, where they used to appear on the page for the paperback collection of Richard's Poor Almanac. I'm not really sure what they mean, but boy, whatever they're describing sounds great, and it's probably a bargain, too. Or it would be if you could find it for less than $82.49.

Well now you can! As I've mentioned before, our fine local independent bookstore One More Page Books, under exclusive contract*, is the sole vendor of all those copies of Richard's Poor Almanac I bought cheap when the publisher went under. I mention this because my wife just dropped off a whole box of the wretched things because we're moving and space is tight. SIGNED COPIES are going for the original cover price of $15 (that's in 2004 dollars!) and they'll ship your book right to your door for just $4. Run on over to 2200 N. Westmoreland Street, Suite 101 Arlington, VA,  22213 or call 703-300-9746 or email info@onemorepagebooks.com. Mention that you saw this offer on my blog and you'll get a blank stare! 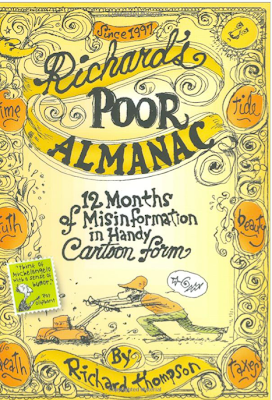 Posted by richardcthompson at 5:23 PM 15 comments:

Labels: *plus I get candy

You may recall my post of about two months ago announcing the complete Cul de Sac, coming this November but available for pre-order from Amazon at a price that fluctuates mysteriously but currently holds at $43.22. If you think that's a bargain, get a load of this.

Thanks to the tireless efforts of Mr. Chris Sparks the foreword to this mammoth undertaking is being written by the renowned artist, editor, graphical polymath and all-around comix passionalist Art Spiegelman! Art joins a short line of other comics notables, like Pat Oliphant,  Bill Watterson, Mo Willems and Lincoln Peirce, who've attested to my overall lack of objectionable qualities. I've been very fortunate in the people who've written forewords for my books. 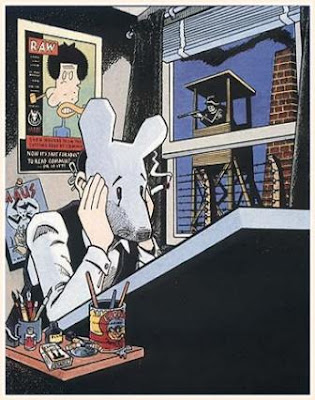 Except for Peter (Petey) Otterloop, Jr.. In his rather ungenerous foreword to the third CdS book, Shapes & Colors he wrote,


Cul de Sac is not my favorite comic strip. It's OK, but it's not my favorite (comic strip) and I didn't finish reading this book. All I got to was page 32 and I figured it wouldn't get better. There's too much talking and running and small kids and yelling and the colors are too bright. My favorite comic strip is Little Neuro. I like it because there's a lot less talking and running and the colors are not so bright. Little Neuro jokes are better than Cul de Sac jokes too. Cul de Sac has things like jokes but without the funny part at the end.

Also the back of my head doesn't look like that, so Cul de Sac is not an accurate comic strip.

I'm confident Art Spiegelman will write something a bit more professional. Especially as, to the best of my knowledge, the back of his head has never appeared in the strip.
Posted by richardcthompson at 1:46 PM 11 comments:

Labels: for my next book's foreword we'll have to defrost Walt Disney

FCBD; Lo, It Approacheths Ever Nearer, A Lazy Repost

As everyone on Earth knows, Saturday is Free Comic Book Day. Here, again, are Poor Almanacs  that celebrated this fine national holiday. Mangaloid Wars X: Giant Spazzoid Zombie Robots Invade (third below) is the best thing I've ever written, I think. I should've had Petey read that comic.