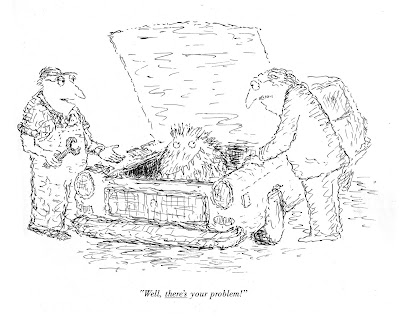 I figured something with wiggly lines would be appropriate after the earthquake, so here are two masters of the inky jitters, Ed Koren and R. O. Blechman. Back when, I tried to draw like both of them, sometimes simultaneously, with unsatisfying results (about the third drawing I did for the Post was one where I tried for Blechmanian spareness, but I over-did it and the drawing practically evaporated in printing; I thought that was the end of my career right there). But nothing'll free you up from the awful tyranny of a neatly inked line like these guys.

That's not exactly true, their lines are perfect, it's just that neatness doesn't count. Koren draws the spaces in between things and his lines jump from one to the next like electricity, but slower, like dust motes. And Blechman draws like each line's a teeny organism in itself and they all just met up at this moment to form into something worth looking at.
Posted by richardcthompson at 5:43 PM

Labels: Your other cartoonlike inspiration for today