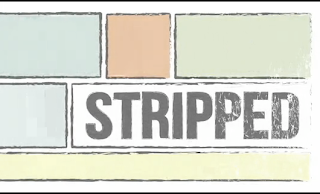 Dave Kellett, who's a smart and articulate guy as well as the cartoonist behind Sheldon and Drive, has been working with cinematographer Fred Schroeder to film a documentary on the modern state of the comic strip for a couple of years now (and probably thinking about it most his life). Suddenly he's got a trailer put together and a Kickstarter site up for it. For donations of $35 K he'll come to your house and powerwash your deck. More reasonable donations also accepted.


Posted by richardcthompson at 9:36 AM 4 comments:

Labels: all i say is "peanuts' 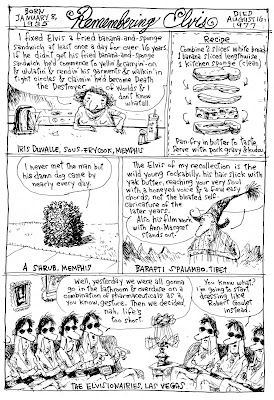 This continues a tradition of running this ancient pre-Almanac on the anniversary of his passing, though I usually forget to.
Posted by richardcthompson at 6:42 AM 5 comments:

Chris Sparks has filmed a video tour of the Team Cul de Sac art collection, which is housed in the plush conference room of Andrews & McMeel.
Posted by richardcthompson at 6:36 AM 3 comments:

Labels: exclusive for our readers

Tom Spurgeon writes entertaining, wise and funny posts every day that covers every inch of the wide world of comics. Today, though, he writes at length about something very personal and scary. Here too he's wise and funny and even gently profound in an essay that deals with mortality, his comic collection, the working life and, somehow, the Green Lantern movie.
Posted by richardcthompson at 5:32 PM 1 comment:

Ernesto has been barricading himself in a carrel fort in a remote corner of the library for several summers now though this is the first time he's felt compelled to explain why he'd need to. This Sunday strip is the remnant of a string of dailies featuring Ernesto's latest decline and fall. This time he was caught by the Future Adults of America appropriating a box of doughnuts meant for fund-raising and subsequently kicked out. I think he started a competing group but I forget what it was called.

The origami jumping frog is a real thing, even if Ernesto possibly isn't. I like them so much I included one in the first published drawing of Alice (below), though they don't really look much like that. My wife can make them. She used to carry origami paper in her purse and would sometimes make things at an odd time, like when waiting for food in a restaurant. Then we'd all try to make the frogs  jump into someone else's drink glass. 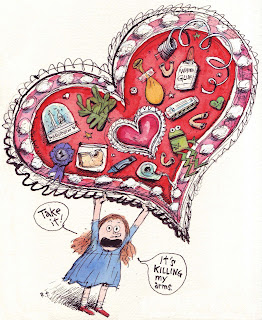 Posted by richardcthompson at 5:22 AM 5 comments: 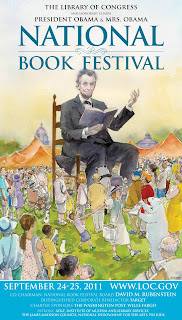 The Library of Congress has graciously invited me to participate in the National Book Festival, to be held this September 24th and 25th on the National Mall. I'll be joining hundreds of authors like Dave Eggers, Tomie dePaola, Rita Dove, Sherman Alexie, Jonathan Yardley and David McCullough at the dust-choked midway of gaudy tents and stands lining the Mall. There'll be diversions and games of skill galore, like Whack-A-Motif, Dunk an Unreliable Narrator, Guess-Your-Weltanschauung and Skee Ball plus greasy food on a stick, so come on down for two whole days of literary fun!

Seriously, I'm tickled!
Posted by richardcthompson at 10:23 AM 7 comments:

Corey Pandolph Steps Up When Thompson Flubs It 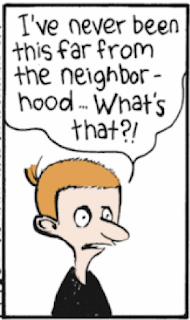 The ever-reliable madcap polymath Corey Pandolph generously invites a few CdS characters into The Elderberries for a whole week.
Posted by richardcthompson at 10:27 AM 2 comments:

Here's a whole, solid, brand-new week of Cul de Sacs along with some unnecessary commentary. Last summer Cartoon Camp was taught by Dan Spinnerack (below) 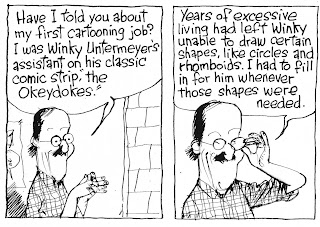 I think I redrew him a dozen times trying to find the right guy.

In his earliest, larval stage he resembled the cartoonist Seth (below) if he was played by an anemic Johnny Depp. I didn't think the public was ready for that quite yet. 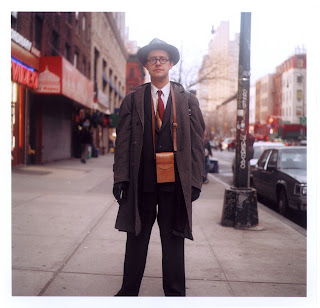 Casting the right guy for a part in a comic strip is important. It can be fun, if the right guy shows up, but if he doesn't you have to keep looking till you find him. I wanted someone who looked like he could possibly be related to Dan Spinnerack. Beyond that I wasn't sure. One role that I've always been proud of casting was the bit part of the Fed-UPS driver who gave Mr.Danders a lift back in 2006 -

I keep hoping to work with him again, but the opportunity hasn't presented itself.

After redrawing him a dozen times I eventually I found his face, got him dressed and named him. Six months of touring historic cartoon sites would barely scratch the surface of the Buckeye State's offerings (Ohio license plates bear the motto "Incubator of Cartoonists").

I like the idea of a daily diary comic. Those who do it well make lively, interesting comics out of unexpected choices and juxtapositions of the quotidian. I'm not sure that makes sense; just go read everything by Dustin Harbin and you'll be the richer for it.

Really I just wanted the kids to have something different to do at Cartoon Camp this year and this seemed like a good direction to wander off on. Andre, Pete and Loris should each respond to it in some amusing way, I hope.

Although Pete might get too tightly focused on the boring, dull and uneventful part and produce a sluggish comic. This can drag a comic strip down and scare away readers, as I'm slowly realizing.

I've never heard windshield wipers say "Wipey". Those on my first car, an '82 Sunbird, went HIRNK-HORNK, but that sounds too much like an oboe onomatopoeia and I don't want to confuse people.

The next week of Cul de Sac is all repeats I'm sorry to say.
Posted by richardcthompson at 7:56 PM 8 comments:

I'm happy to hear that 13-year Cicadas are popping up in the South and Midwest, because coincidentally I just scanned some old Poor Almanacs. They all date from 2004, when the most recent infestation of the 17-year variety erupted in the East.

And here's an early CdS with a cicada theme. it was redone for syndication and reused a month or so ago.  Who knew cicadas were such comedy goldmines? I hope they come back more often! 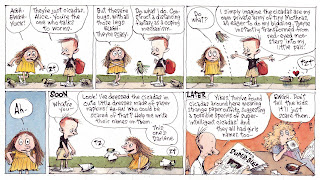 Posted by richardcthompson at 10:34 AM 8 comments: