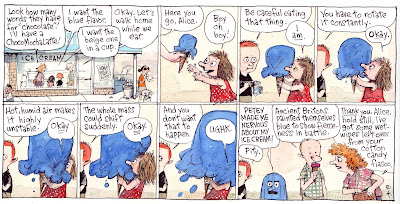 This is the original, slightly different, version of today's Cul de Sac. It's drawn from life, as we have a Baskin & Robbins about three blocks from the house, and I've never been able to eat an ice cream cone neatly. I can recall eating an ice cream cone once when I was about six and having my usual trouble with it, and hearing my aunt say to my mom, "How'd he get it in his socks?" It's a skill I've passed on in varying degrees to both my daughters. 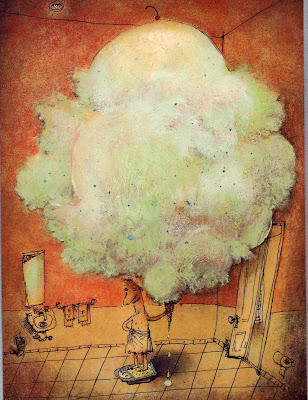 Another thing I've always had trouble with is drawing food. When I try to, I end up with a mass of lumps colored brown or green, with red specks. But I do like this drawing of an ice cream cone, drawn for the Diabetes Association about 20 years ago. I like the lumpiness of the background and the textures in the ice cream (pistachio?). I wouldn't care to eat that cone, as I'd probably drop it and kill myself, but also because I'm just not a huge ice cream fan. Usually about halfway through eating it I get bored with it and give it to somebody else. Now pie, that I'll fight you for.
Posted by richardcthompson at 12:56 PM

And, technical comment here, for those who didn't see the strips when they ran in the Post - click on the ice cream strip to blow it up and look at Richard's watercolors. If only his syndicate could handle watercolors....

Naw, I just gotta learn how to color digitally; it can be done.

Yeah, that's the B&R, where there are always swarms of sticky kids playing tag in the little greenspace.

I'm amazed at that giant ice cream cone. Before I embiggened the image, I thought you'd actually and uncharacteristically glued some cotton balls or sumthin' to the paper. Plus, I love the teeny, tiny cherry on top.

Last summer I was sitting outside a local "cone & burger" joint, enjoying (rather messily) a chocolate-dipped soft serve cone. There's NO way to eat that neatly. After I had finished a gentleman approached our table and said, " I just wanted to tell you that I have NEVER seen anyone enjoy an ice cream cone as much as you have that one." Embarrassing? Yes. True. Yes. Oh yeah, great cartoon!

"Pity." Ha ha! That should be Petey's catch phrase.

Food IS hard to draw. Why is that? Figure that one out and you'll nab your second Pulitzer.