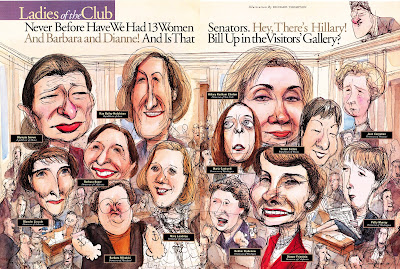 These days the Senate has 20 woman senators. I think about drawing 20 caricatures and I'm suddenly glad to be out of the business.
Posted by richardcthompson at 5:53 PM 2 comments:

I got an email the other day from Ben Morrow who, after apologizing for asking a strange question, asked, " how do you decide what your scenes are going to look like?"

It's actually an interesting question and seems so basic nobody ever asks it. Bear with me while I use his email as an excuse to post something, as it's been a while.

What you draw is all pretty dependent on what you've written. First you figure out where the balloons go in the panel; they have to be placed for easy reading (this can involve some rewriting). You have to keep in mind that the "tang"- the little bits hanging down to show who's speaking -  can't get tangled up in knots. Clarity is important here. If the speakers switch positions from panel to panel you can use several tricks to keep continuity; like moving your "camera" around or using the action to explain the shifts (even if the action has nothing to do with the dialog- the characters are kicking a ball around or playing on the floor or something; anything to make it more visually interesting, something I had to keep in mind with a talky strip like Cul de Sac). In theater this is called blocking. It prevents characters from colliding or walking out of windows.

Then you get into stuff like close-ups, group shots, etc. Again, it's determined by your script- how can you give the words the most oomph. I always tried to include a variety of shots per strip as long as it didn't get too jumpy. Of course, repetitious shots are fun too- Petey reading on his bed with tiny variations worked well. It gives you a chance to play director, cutting from this shot to that, trying always to heighten the comedy (if that's what you're aiming for). And what you don't show is often the funniest.
Posted by richardcthompson at 2:23 PM 2 comments:

To Our Friends Across the Sea

Chris Sparks has agreed to act as our International Sales Representative. Meaning those of you who wished to buy a copy of Richard's Poor Almanac but were stymied by accidents of geography from ordering from One More Page Books should email Chris at jeditrue@gmail.com (I told you he was a fanboy) and give him your particulars. For only $20 plus shipping Chris will send you a rare, desirable, unfoxed first edition* of RPA, in the original untranslated English! As a bonus your package will be postmarked from Asheville, North Carolina, America's premier destination for fun! 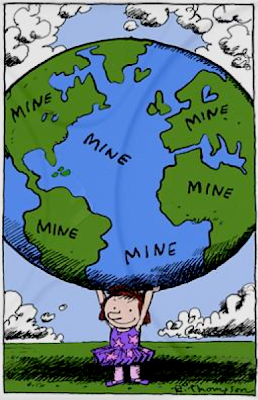 *Ha! Like there was a second!
Posted by richardcthompson at 6:44 PM 6 comments:

Labels: yeah I know Alice has nothing to do with the Almanac 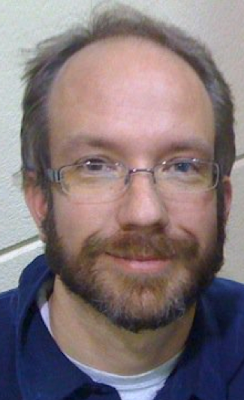 Do you see this man? It's Chris Sparks, my friend and inspiration, the perfect audience, tireless supporter and fanboy miracle worker non-pariel. His good work as a fund-raiser, comics enthusiast, social director, brace and stalker add up to a debt I can never hope to repay. But I can do this: today's the final day of voting for the Eisner Awards. GO RIGHT NOW THIS SITE and vote a straight Chris Sparks/Team Cul de Sac ticket. If you do then Chris's trip to San Diego Comicon 2013, site of the Eisner Awards Ceremony, will have the happy outcome he deserves. And he won't return home to his daughter, the adorable Emily, empty-handed. 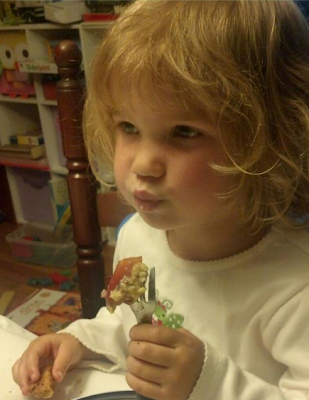 Labels: Because if he does it'll be your fault

I know some of you will be attending Heroescon in Charlotte, NC this weekend. I wish I was! And not just for a plateful of Mert's shrimp and grits! If I was in Charlotte this Friday evening I'd be at the 3rd Annual Drink and Draw, where miracle worker Chris Sparks has assembled an eye-popping collection of books and art to be auctioned off for Team Cul de Sac (haven't we beat Parkinson's yet?). Among the fabulous swag Chris has pulled out of his sleeve: a copy of Maus, signed by & sketched in by the legendary Art Spiegelman; the paperback complete Calvin & Hobbes, signed by the so-legendary-he-may-be-imaginary Bill Watterson; and original art by cartoonists Patrick McDonnell, Mark Tatulli, Terri Libenson, Dan Piraro, John Hambrock, Jim Borgman, Ron Ferdinand, Bill Holbrook, Brian Bassett and Mo Willems. 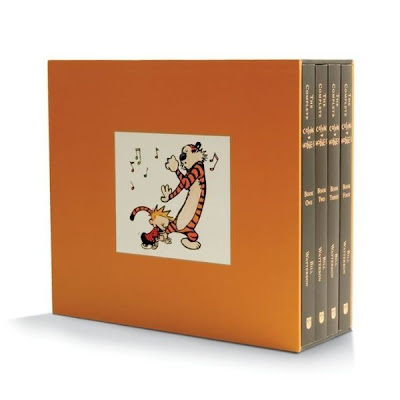 Wow! What an array of fabulous swag! Of course, since it's Drink & Draw, the place will be crammed with artists, amateur and professional, doing just that! And the results of their labors will also be auctioned, the proceeds going to Team Cul de Sac! While you're out wandering the convention floor be sure to look for Chris's table at the address below. He'll have all kinds of stuff, including about 40 copies of Richard's Poor Almanac! Please say Hi to Chris for me, and find out if he's figured out a way to fedex plates of shrimp & grits directly from Mert's.

Posted by richardcthompson at 11:08 AM 4 comments: