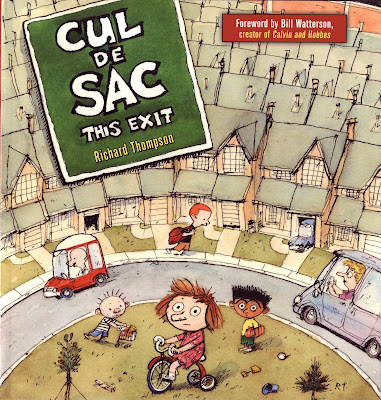 Yesterday the mailman brought me two early copies of the Cul de Sac book, fresh from the printers in Singapore via Kansas City MO. The knowledge that thousands of copies are about to descend on an unsuspecting world where they'll be bought, read, enjoyed, given as gifts, puzzled over, regifted, remaindered, shelved and mulched fills me with glee.
As I expected it all goes downhill after you read the foreword by Watterson, though the book does have its moments. The only error I found was in the reprints of the earlier color Sunday strips; the first of the Dander's Search for Love sequence is out of order. But it doesn't ruin the story arc, or whatever you call it. The mistake may actually enhance the book's collectability: First Edition with errata, corrected in second edition, $300. As long as it's also dog-eared from use that's just fine by me.
The image comes up real big if you click on it because I forgot to resize it. So pleae consider it an exclusive Cul de Sac poster or wallpaper for you! And I mean actual wallpaper, not the computer screen kind.
Posted by richardcthompson at 6:55 AM

I have it on pre-order, and Amazon swears that they'll be shipping it on Sept 5, which is right before my wife's birthday, so I'll be able to give it to her as a birthday present, but I'll have to tell her that the chocolate stains on the pages that appeared while I was reading it were part of the page design and then I'll distract her with the whole "Danders out of order" thing.

Looking forward to it.

What a coincidence. My wife and I were just discussing wall covering options for the living room!

I am from Singapore and I had pre-ordered the book..kinda ironic that the book is printed here , shipped to the states and gonna be shipped back to me ,back in Singapore!!!

Wonderful! I can't wait to have the book in my hands!
In the meantime I'm collecting your strip on Linus...;)

(...are there some new contacts to translate the book in italian?)

I'm actually so excited for this to come out! I think my sister and I are buying separate copies since this is definitely the best comic our newspaper (The Sun - Vancouver, Canada) has to offer!!!

Anxiously awaiting for this to come out! Will try and overlook the Danders issue :)

Best of luck with this, it sounds very exciting! I love your strips, and I'll look out for this in the shops.

(as we say here in the internets)

Totally pre-ordering this! It looks great!

well, that explains why i couldn't find it yet at the bookstore...! for some reason i thought it was already out. can't wait to get my hands on it!

Thank you all, and by my count (12) more peoples have bought this in preorder than bought the Almanac book in its entire career.
If anybody wants a copy signed, lemme know. I should post that somewhere I guess.

I can't wait to get my copy!