I don't really have any convention memories. But back in the late 80s I approached the Washington Post about maybe going to the Democratic or Republican convention to do some drawings. It didn't work out, which in retrospect is just as well; I don't do my best work with the kind of distractions and deadlines that it would've entailed.

But I did these drawings of George H.W. Bush, as practice, but also because he was and still is just about the most fun politician to draw, short of Richard Nixon. Somebody said years ago that the English produce the most caricature-ready politicians on earth, and GHW Bush seemed to have a face imported from the Sceptered Isle. But it wasn't just the face, it was the facial mannerisms, or espressions he pulled. And the expression is the most important part of a caricature, I think. GW Bush makes some of the same faces but he's more round and baby-faced while his dad is more elongated and tall-headed, and I'll go with drawing angular over doughy any day.

So really this is just another excuse to post old stuff I still like. These were never published, though I plundered them a few times for various freelance jobs. The last pencil sketch below is my favorite of the Bush Suite (as I've just named it) and I used it a coupla times, like in the color piece below it. That was done for either US News & World Report or Mother Jones, I can't remember which, to illustrate Bush's hyperactive mannerisms and, because I gave it to Art Wood back when, it's now held in the Library of Congress with most all the rest of Art's collection. 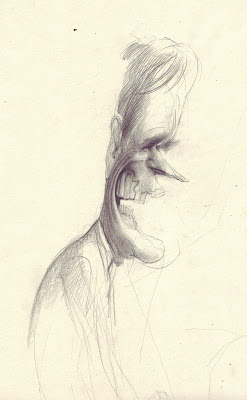 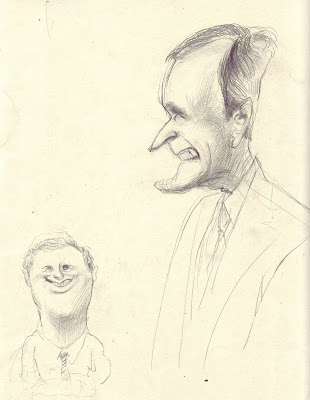 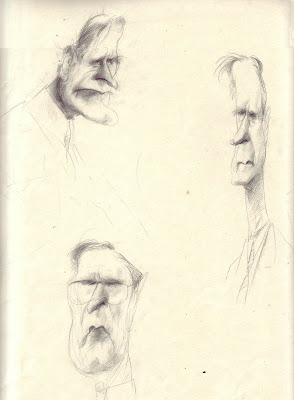 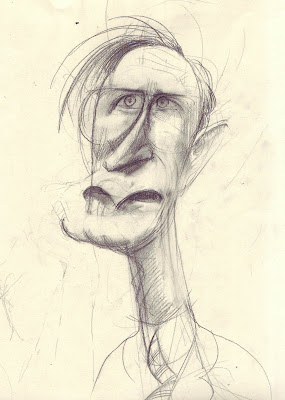 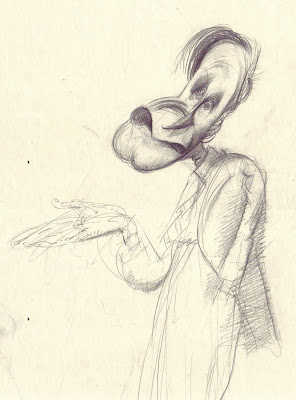 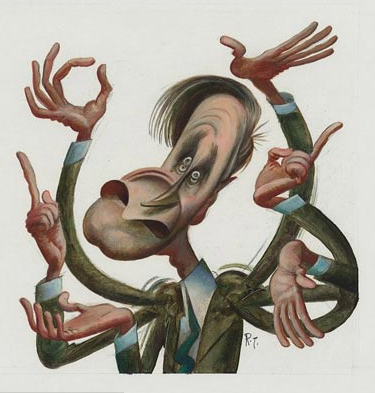 That last sketch was inspired by a photo of an Iroquois mask that's in my old copy of Gardner's History of Art from college. In doing caricatures you can fall into a rut; the same-old-same-old head, nose, mouth, etc. for a particular subject. I once heard the great caricaturist John Kascht say he was stuck on a job that wasn't coming together the way he wanted, his sketches weren't inspiring him, he was drawing the subject the same old way, he was having a bad day. Then he looked at a crumpled up paper bag lying in his studio and bingo, there was the face (I can't remember whose it was, somebody with crumpled up features). Since hearing that I've always made it a point to leave a lot of trash all over my studio floor, just in case some gum wrapper might suddenly resolve itself into Dick Cheney
Posted by richardcthompson at 9:42 AM

That last one looks influenced by a famous caricaturist whose name is on the tip of my tongue, but not my brain. Covarrubias?

Yeah, I used to like him a lot; still do, but he's hard to learn from as he took that style to its peak, him 'n' Al Hirschfeld. And hey, Mike, the tip of your tongue spells pretty dang well. I had to look up "Covarrubias" to make sure I had it right.

Oddly enough there have been some Covarrubias exhibits in DC in recent memory. That's a fascinating comment - "he's hard to learn from as he took that style to its peak, him 'n' Al Hirschfeld." I had never thought of cartooning that way before.