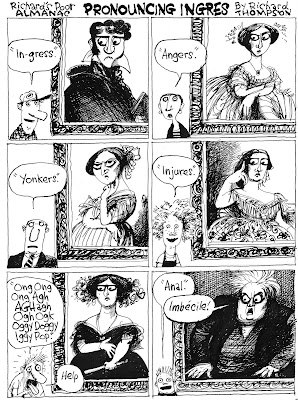 In the late '90s the National Gallery in DC had a big show of the great 19th century French painter J.A.D. Ingres, and I drew this cartoon. I like Ingres' work a lot, with that kind of awe that such perfection of technique inspires, but I've never yet pronounced his name correctly. It's kind of AHNggghh, all the way in the back of the throat, using mostly your tonsils.

So I did this cartoon with that usual feeling of, Who's going to get this? My editor just asked if this guy was real, and was his name spelled right. And the Post printed it, a few people read it, and life went on.

Then some time later I got a call from a curator at the Metropolitan Gallery of Art in New York City. The Ingres show was about to move up there, and she said someone had brought in the Pronouncing Ingres cartoon and passed it around and they'd chuckled at it duirng a meeting, and how'd I feel about them putting it on a T-shirt for their Ingres Show Gift Shop? I said sure, though there wasn't much actual money involved, but you know, I figured the cartoon had found its audience and how cool is that? The curator also invited me up to the opening, which I couldn't make as we had a new baby in the house or I was busy or something.

Then a month or so after that I got a call from an editor at the Wall Street Journal asking if they could reproduce the cartoon, and I said sure, and he said thanks and hung up. A day or two later a friend stopped by with a copy of the WSJ and in it was an opinion piece on the cultural pages excoriating the Met for selling these trashy T-shirts with cartoons using the word "anal" from the low-class Washington Post printed on them. Well! I thought about sending a strongly-worded letter to the editor, but I didn't know exactly what to say, so I never got around to it. Like I said, we had a new baby in the house and I was busy.

The other thing was, I never got the drawing back from the Met, though they did send a T-shirt (the above was redrawn from a copy off the shirt). I let them keep it so I could say that my work is in the permanent collection at the Met.

Update: below is the opening bit of the WSJ column. It later says, "It's no surprise to learn that the Met's T-shirt originated as a Washington Post cartoon." But does it mention my name? No! Ha ha, I'm glad I'm not bitter! And I only kept the article because I've been too busy to throw it away.

Posted by richardcthompson at 1:34 AM

Wow, a strip at the Met AND a bad paper ! How cool.
If you can't say "Ingres" correctly, I don't know what you could do with "Bruegel le jeune" or even "Edouard Vuillard"...

Broy-gil leh zhong, Edt-ward Voo-yhar. Close? My problem with Ingres is I always add an r on the end; Onnng(r).
My all time favorite artist is Degas, and not only because he's relatively easy to say. My favorite artist to say is Pollaiuolo, but he's Italian and therefor easier to pronounce, for me at any rate. I didn't do so well in high school French (imbécile, c'est moi}.

Sacre bleu! What is this world coming to?! A bit of humor expressed in our temples of artistic reverence? Next thing you know our scholarly journals of commerce will be running art criticism fluff pieces!

Funny how Mr. GLIBson (Ha! How do I come up with these zingers?) comes off like he's the master of propriety, but at the same time isn't above lying by omission to get what he needs for his pithy little article.

I'll be bitter for you, Richard.

A shame the original is lost though.

Every now & then I go off on my own little 'Ingres'-pronouncing jag (usually while in the car by myself, when my vocal talents really shine). It's a challenge. For me, helps to warm up the mid-to-posterior glossal with some German -- say, a half-dozen repetitions of 'wirklich ungerecht' or 'teuere Rückfahrkarte.' Anyway, wish I'd known before now of your thoroughgoing treatment of this problem for the Post.

had i seen this t-shirt at the met i would have taken two. great work!

a trick if you want to pronounce ingres right is to add a tiny "e" sound at the end: uhn-g-rollin'r-(e). a little-known secret of french is that you're actually supposed to pronounce those "silent" trailing e's but none of us native speakers do, probably because we're so eager to get to the next word. but when you get a hard to pronounce word like ingres, then listen well & you will hear that so-called silent e...

(you will, however, never hear the silent "s" as that one is definitely sssssilent.)

oh. & the loving way you reinterpret those ingres paintings should show just how "seriously" you take them. some people are just definitely devoid of any understanding of even light irony.

would love to see your interpretation of an ingres odalisque. those are my favourites.

okay, you can all tell me to shut up now.

So the Wall Street Journal has no sense of humor. Whadaya expect from a paper that doesn't run comics?

Thanks, youalll, but I was more kinda tickled than bitter; tickled that such an off-hand idea went so far, even provoking a puny controversy. And it was only a signed column, not an editorial, so I don't hold it against the Wall Street Journal, I've even done some freelance illustration work for 'em since. And they publish Mike Lynch's cartoons, so they can't be all bad.

Paul B, you do that silly-voices thing in the car too? I'm glad I'm not the only one.

And David T, thanks for the pronunciation lesson! I'll get to work on one a them odalisques.

So I'll never be able to pronounce his name since I have no tonsils...

I just found this--sorry for my late comment--David T has it right, it's basically uhng-rh-uh. Well, neither of the "uhs" is quite the right sound, but that's the best I can do in writing. By the way, Degas is supposed to have pronounced his name "Degass." The non-silent final "s" was kind of an aristocratic thing to do in 19th c. France.