The joke here, if there is one, is that Hillary is posing as the front-runner. Haha! 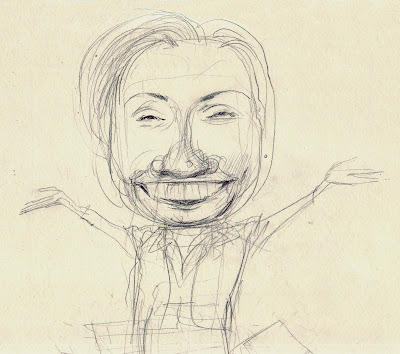 This Hillary caricature was also posted some months ago so she make look a little familiar. I think I drew it for fun a coupla years back and I've been waiting for a chance to use it since. And I did a Hillary finiger puppet joke last October, but I kinda hated the drawing, so this kills two birds with one stone.

It actually kills a whole flock of 'em, because the first idea I had was to do something like this with Hillary. This one's from about four years ago during a previous exercise in democracy. It's sort of what's called a "wallpaper gag", one where there's a simple repeating image, though this one varies a little. I've also done this with John Kerry and Al Gore, but this one's my favorite, though despite my best efforts the man got elected anyway.
Posted by richardcthompson at 6:09 AM

A cartoonist whose best efforts don't change the political landscape is ... still a cartoonist, happily. In your case, still a great cartoonist.

Thanks, Paul. As long as nobody blames me for anything.