This is the first appearance of Petey, on February 15th 2004, in the second strip published in the Wash Post Magazine. He's changed only slightly; I think I like his hair better here. And below this strip is an Almanac cartoon from maybe ten years ago. See? It all fits together. Someday I'll figure out how every drawing I've ever done is a small piece of a larger picture, and my personality will then be so integrated that I'll be issued a certificate of guaranteed sanity by whoever's in charge of such things. Then I won't know what to do with myself. 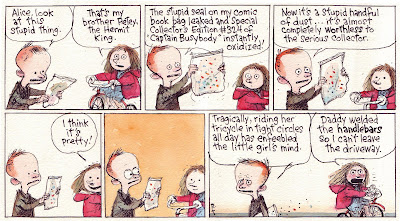 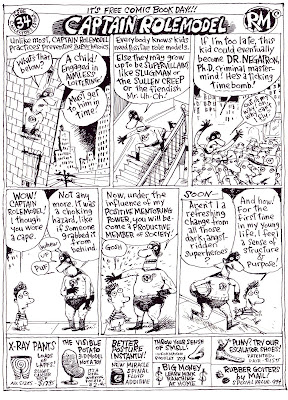 I think the Captain Busybody strip just proves that superheroes are impossible to parody, unless the parody takes the form of Herbie or the Tick.
Posted by richardcthompson at 1:35 AM

Labels: Brought to you by X-Ray Pants

Stephen King went a little bit weird when he decided that everything he'd written was part of some great overweening whole.

I'd be a little frightened if that happened to you.

Oh, how embarrassing! I'm about to correct a manual "typo"! In the Captain Rolemodel comic, the aimless boy says "WOW! CAPTAIN ROLEMODEL! I though[t] you wore a cape." It's missing a "t."

Sorry, my English-teacher mother rings in my brain whenever I read stuff.

On the other hand, I can't think of any other contemporary cartoonist with such great drawings as you have, Richard! Thanks for bucking the trend of boring syndicated strips!

Technical question. I love the watercolors on your panels. Do you paint on the original line work?

I dunno ... I'd say Captain Rolemodel is a pretty darn good superhero parody.

I mean, it might not work as an ongoing series like The Tick or anything, but still ...

Although I'd love to see something featuring the Sullen Creep.

Stephen King did that? So like Carrie can ride around in Christine and the Jack Nicholson guy and the Kathy Bates girl can get together and be crazy? Sounds like the Marvel Universe or something, where everybody's somebody's cousin.

Jeez, that typo's been there forever, thanks. Lettering isn't writing, but you should be able to read it at least. Actually, that's one I redrew for the book as I'd given away the original, so it only goes back 4 years, but still. And thanks, dh!

Timm, I color all the illustration work pretty simply, just draw it in waterproof in on watercolor paper, soak & stretch it on a board, then color it with watercolor & gouache. For the syndicated Sundays I use a color by number grid that I'm still figuring out. Photoshop some day...

Yeah, Josh, the bad guys are more fun. A friend of mine invented one called Fruitcake. HIs powers weren't fully determined, but he'd always show up even though you didn't like him and there was no getting rid of him.