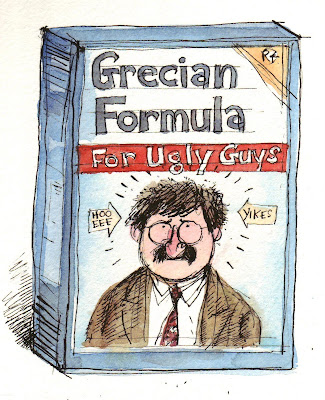 And richly deserved too. I hope you all read his Wash Post Mag story about Joshua Bell busking in the DC Metro. If not, go do it now . And watch the video of Bell in the subway. It's a fascinating piece, and it makes you wonder, what would you do if you were unexpectedly confronted with Beauty, Art & Genius in a wholly unlikely place? Especially if Beauty, Art & Genius was playing for throw money?

And my apologies for the above image. In several years of drawing Gene for his column this is the only one that looked remotely like him. Back in the early 90s, for about 5 years, I illustrated a column by Joel Achenback called Why Things Are that Gene edited (Joel & Gene, along with several others Post staffers, had migrated north from he Miami Herald when that paper took an editorial nose-dive). When Joel ended the column Gene asked me if I'd like to try a weekly cartoon, which eventually became Richard's Poor Almanac, and he was my editor for the first few years. So I owe Gene bigtime. And for a while on the side I illustrated Gene's column in the Post Magazine, where I'd often get to draw him and his fabulous mustache.

Update, here's another one, and not as mean, kinda- 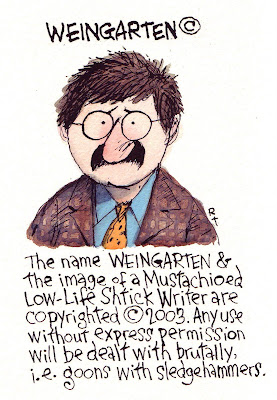 Posted by richardcthompson at 5:23 PM

Yeah, Gene! Just saw this announcement. That article he wrote about Joshua Bell was one of the most engrossing things I've read in a long time. I especially remember him describing how, without exception, little kids reacted to Bell, pulling back from their parents hands wanting to listen to him.

That piece got me, emotionally, to a degree that's still surprising — left me kind of stunned for a while after. Glad it got the wide exposure it did. (I saw it on ALDaily myself, not in the Post.)

It is a haunting piece. I'd like to think that I'd recognize Bell, I've heard him in concert, but if I was in normal don't-stop-keep-walking mode, who knows?

On the other hand, there's that guy who plays the erhu who's often around the Federal Triangle Metro station, and I stop and listen to him when I see him. But then, I'm not a real commuter.

The Great Zucchini feature issue and the Josh Bell feature issue are the only two Post Magazines that I have kept, rather than recycling. That says something about Gene and his writing, if I'm any judge of such things (and I'm certainly not a Pulitzer judge).