A Milestone in Comics History 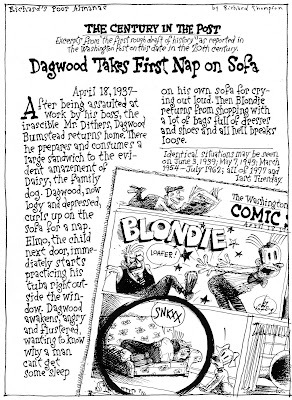 Here's a piece of phony Comics History, presented to you a few days early so you can plan how best to ignore it. Back in 2000 the Post ran a daily feature called The Century in the Post, reprinting whatever article was most interesting for that day from the last hundred years, duh. And the feature looked a lot like this parody, except it wasn't hand-lettered and it wasn't made up. I'll come clean and admit that I don't know when Dagwood first took a nap on his sofa, but I'll guess that I chose the date August 18th because I couldn't think of anything else to draw for that week.
Posted by richardcthompson at 10:43 PM

"...and all hell breaks loose." Ah yes, those were the days.

In 1937, it probably would have been Herb and Tootsie Woodley's kid, Alvin. Elmo is a late arrival. Not EVERYTHING in Blondie has been going on forever.

Funny, and no offense to Chic Young, but man oh man I could read a whole bunch of Dagwood penned by RT. Checking alternate universes now...