Your Old Caricature from USN&WR for Today 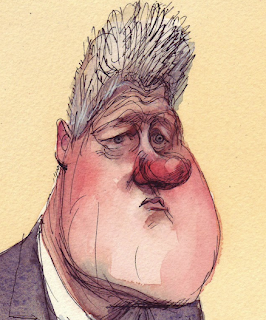 A month or so ago U.S.News & World Report announced it was ending its availability as a subscription print magazine and switching to digital publication with some vestigial newsstand sales (see here and here). I freelanced for them for years, going back to the late '80s, doing spots and caricatures and at least two covers. In the mid '90s I started drawing for them every week, illustrating a column in the front of the book called Washington Whispers that featured inside-baseball political-gossip reporting. I'd known and worked with the art director, Michele Chu, for some time and she asked if I'd be interested in a weekly gig with a horrifying deadline that paid decently. Washington Whispers had run in USNWR for some time and several caricaturists had illustrated it, including Taylor Jones, and they were looking for a new one, ideally a local guy. So I said yes.
The deal was they'd give me the subject or situation on Thursday around 4 and the final was due on Friday around 11 (which often stretched into the afternoon). I can't remember who the first subject I did was, but I do remember it was a crummy overworked lump of a painting and they asked if I'd please redo it in a looser style, and quickly please, so I did. This is when Thursday nights first turned into all-nighters for me, a habit I'm still trying to shake. Over the next few weeks I got into the job's rhythm; get a call from Michele, do a sketch and fax it over by 5 or 6, ink the sketch onto (Saunders Waterford 140 lb hot press) watercolor paper with a lightbox and stretch the paper and watercolor it, interspersed with periods of dawdling and fretting. Then call them on Friday and a courier would show up, usually Shawn, to pick the finished drawing up. I did this for 9 years, about 50 times a year, and I learned more about watercolor and the limits of human patience than i ever would've otherwise.


I regretfully moved on in 2004; I was getting burned out and I'd started Cul de Sac in the Post Magazine while still doing the Almanac and they always clumped up on Friday. Ideally, the way freelancing worked was you'd get a few standing gigs, illustrating this or that column or whatever weekly or monthly for various clients and then you'd get one-off type jobs, a cover or a page here or there, With the decline of print this type of illustration has declined too, and I moved into newspaper comic strips I just in time to watch that decline as well. DC is a huge center of publishing, with the government and all the various associations with magazines and newsletters and such. USN&WR, The Atlantic and National Geographic are the only big national publications around here though and it's sad to see USNWR move on too. But I wish them luck wherever they go.
Here's a Clinton I did for them in '98, when he was experiencing some financial embarrassment. First the sketch I faxed to Michele. 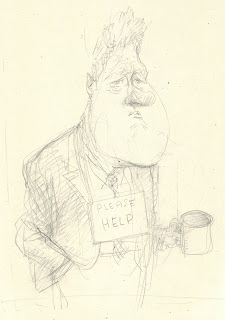 And here's the final. I like this one, especially the suit. I've got piles of these, some good, some so-so, and I'll post them from time to time. Only the good ones, to present a slanted view of my caricature prowess. 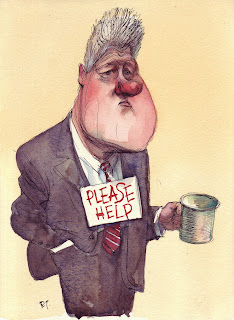 Posted by richardcthompson at 8:11 PM

Glad you included the part about the courier, since I had kind of forgotten how these things worked in the analog days. When I got to use a prehistoric fax machine in 1980, it was like getting to ride in a space ship. Only a lot slower. If the document hadn't been going from Colorado to New York, it would have been faster to just hand-deliver it.

And you certainly wouldn't want to try to electronically send anything that had to look semi-good at the other end.

Those were the days.

Nice post. I really enjoy the explanations of how you operate.

For pieces like this, how did you assign rights? Did the publication get one-time rights, one-time first-time? Since you have the original (that courier goes both ways?) I assume it isn't work-for-hire, since you obviously have the original.

And, since I'm here, and you haven't posted the strip yet, just what the heck was Mrs. Otterloop making on the table November 20, when Alice was asking about Thanksgiving at Grandma's? Has she got some secret background with the Weather Underground?

Mike, yeah, the first time I bought a fax machine was an Occasion, like the first car. And we got to know some of our couriers quite well, like Sean, Nick & Tom. I hope they're doing okay and've found something more amenable to the digital days.

Neil, they got one-time first-use rights and they'd send back the originals by courier about once a month.

I'll post that strip today with a pile of others. But it looks like she's cleaning the gears in her iPod.

Didnt you do an Elf /Santa cover for them? Im so ADD.Thats the first time I ever saw your work and was amazed by a cover on a magazine. Years later we crossed paths and I want to know who the hell you are... I am so embarrassed.....
Does Clinton own the art?

Cheese- just added that cover as a link in the story. No, Clinton didn't buy it, but if he wants to here I am!

Man, I had no idea of this weekly stint with US News. And all those years. I could've taken opportunity to look it over at checkout in Giant or something, at least. I'm far from making up my mind what what's being lost in the shift away from paper should mean to me, but just at the moment I'm feeling pretty bad about not appreciating that mag more in its day.

Yeap , that is the first time I remember seeing your work. I still think its one of the best covers I have seen. It is just amazing.
Maybe Mr Clinton is a fan. It would make a great Christmas gift for him.