As I'll be away for the traditional Ohio Thanksgiving, I've defrosted these old and unrelated things. The first, a Cul de Sac is from 2005. the second, a heartwarming Thanksgiving memory a la Truman Capote, happened in 1992. 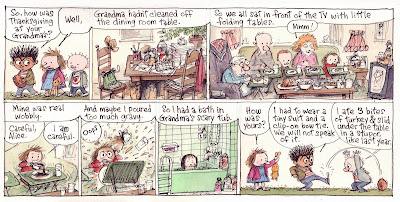 The story below originally ran, in slightly different form, in the Washington Post Magazine with an illustration by Gene Weingarten. Eighteen years ago today, my wife, Amy, and I were about to celebrate our first Thanksgiving as a married couple. We were going to serve a large feast on our new plates on our new table in our newly rented home for as many of our extended family as could make it. The night before Thanksgiving we went to a bar with friends and we had a most festive and enjoyable time, I personally enjoying it more than anyone else. When we got home, in hopes of coninuing my festively enjoyable time, I started dancing around like Fred Astaire would if Fred Astaire danced in his socks.

Our house was old and strangely shaped and it was heated by radiators, big iron monsters, all coils and ribs and flanges. The kind of fixture that would give sensitive children nightmares. I, as Fred Astaire would not, executed a kick that planted my foot squarely into the radiator in the hall, good and hard.

Amy, seeing me suddenly rolling around on the floor, thought I was still enjoying myself, until I pulled my sock off. One toe was bent completely back, and since it was the middle one, it looked like my foot was giving me the toe, if you know what I mean. It was indescrabably funny, in a silent-film-comedy-trauma way. And it hurt like "the dickens". The dickens is when the entire output of Charles Dickens-all 15 hardbound novels, plus journalism, letters and ephemera-is simultaneously dropped from a height and hits you.

The folks at the emergency room were extremely helpful and didn't laugh and didn't yell at me when I did some doughnuts with the wheelchair and knocked over the IV stand. But the nurse on duty did tell me an awful story about when he was in the Navy and won a $300 bet that he couldn't pull all the hairs off the top of his foot with tweezers without screaming. And they gave me some Tylenol 3, the kind with codeine, the kind that comes with the warning that not everybody reacts well to codeine.

So that is how I ended up at the head of our table the next day, Thanksgiving Day, with my mangled foot elevated on another chair, presiding over our first Thanksgiving feast. And that is when, not ten minutes into the meal, I fould out I was one of the people who react badly to codeine. And it was Amy who quickly handed me a bowl, the fancy one that matched our new plates and was fortunately empty, for me to react badly in.

It's been 18 years. The toe's still there, of course, though it's still bent a little funny. The house is gone, or at least so renovated it's unrecognizable, and good riddance; it was an astestos-clad eyesore and a menace.

Somehow, subsequent family holidays have never quite matched that First Thanksgiving for intensity of emotion; not the Christmas of the Flaming Oven Mitt, or the Other Thanksgiving When the Fireplace Blew Up, or that Day or Two Before Easter When We Had to Evacuate Because of a Carbon Monoxide Leak That Almost Killed Everybody.

The only downside is that, ever since I broke my toe that night, I've been forced to draw with my hands.
Posted by richardcthompson at 11:00 PM

Oh if my huband wasn't still asleep I'd be howling at the story. You made your pain incredibly funny. Thanks!

And I'll be heading AWAY from Ohio to NC today to have a feast with my family. Hope you have a fabulous holiday.

I am in NC and staying in NC, Asheville is just too nice.
Happy Stuffing everyone!

Cheese Guy - I worked in Asheville for 5 years 13 years ago - so I don't blame you. It's a pretty cool place. I'm headed to Hickory today.

you are such a Thompson!

That story should be made into an annual Thanksgiving special. I understand the Peanuts people are now undertaking some fresh works. The people in the ER would all speak like trombones, of course, but I imagine it kind of sounded like that to you at the time anyway.

Great story! I'd suggest you do more writing, but I love your drawings too much.

At least your dog didn't die because the horse kicked him. (Did he?)

bwahaha, I still have 3 of that type radiators in my house - and wouldn't dream of replacing them! :D

I think I would like to see that illustration by Gene Weingarten.

Dear Thompson Help Desk, When I zoom the Blog's tiny strips to make them legible, they become larger but fuzzy. Is there a remedy for this malady? I do so want to see Grandma's bathtub in all its scary details. And where was Big Shirley?