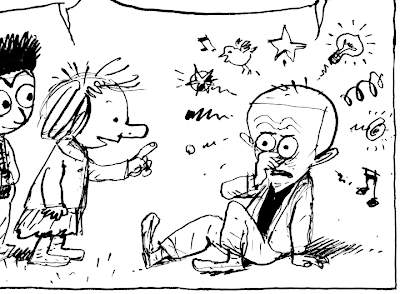 Here's an early sneak preview of the strip for December 29th. Things look bad for Petey but he recovers, mostly unharmed but his dignity in tatters. The strip was really just an excuse to draw stars, tweeting birds, curlicues and other dingbats. Any chance to draw dingbats or cartoon swearwords that presents itself, I say #*$%ing go for it!
Posted by richardcthompson at 4:54 AM

I agree...but no Saturn?

I am confused with, yet fascinated by the inclusion of the "old-timey" lightbulb. Does Petey have an idea in conjunction with the pain? Is it an old-fashioned idea? Or did he merely utter a swear word copyrighted by Thomas Edison? My mind is alive with possibilities, all surrounded by a fog of bewilderment.

can't wait to see the strip!

Seems to me there has been a sad lack of unnecessary cartoon violence in modern comics. Good to see you're not letting the practice die out completely.

Shoot, I forgot Saturn, and that's the fun one to draw. Looks like I'll have to instigate more unnecessary cartoon violence just so I can include Saturn.

Yeah, the light bulb. It was mostly a random object that's fun to draw, though as it has other symbolic comic strip meanings it is kinda confusing. But doesn't a little confusion make things more interesting? That's my story.

The strip'll be like a between-Christmas-and-New-Years present! But I'll try not to overdo the UCV so the strip won't devolve into some baggy pants big foot slapstick festival. Cul de Sac is above all that, but not by too much.

man, you rock.
check my blog.
texts are in spanish, but the strips are in english.