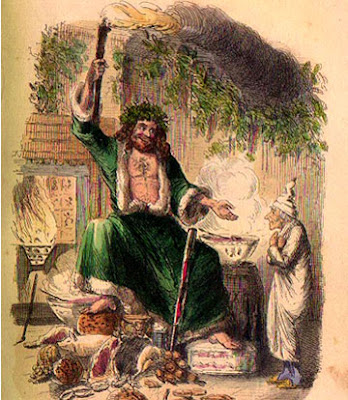 Everybody, go look at Mike Lynch's blog. He's got a set of links to Youtube where you'll see one of the greatest animated half-hours ever produced. It's the Chuck Jones & Richard Williams 1971 version of Dickens' Christmas Carol, that aired maybe a couple of times on TV and has since been unavailable in any form. It's done in a classic, crosshatched pen & ink style, just like the illustrations for the original book. And it's terrifically spooky, too. As Mike says in one of his comments, the part where Marley's Ghost undoes the cloth from around his head and his jaw yawns open is the stuff of nightmares.

Go here, if you dare.

Then look around at the rest of Mike Lynch's place; it's a nice one to visit.
Posted by richardcthompson at 5:34 AM

Aw, shucks, Richard. Thanks for the kind words, my friend!

You could do a RPA on the scary parts of Dickens. I'd put Miss Havisham waaaay up there.

I haven't read enough Dickens to qualify, which wouldn't stop me, but it's true. I've read 3 of his books, one of them several times (Pickwick Papers). I know enough of the plots through movies and stuff, including David Lean's wonderful Great Expectations and the TV adaptation of Nicholas Nickleby. But I need to catch up.