Elephants for Monday on Wednesday! 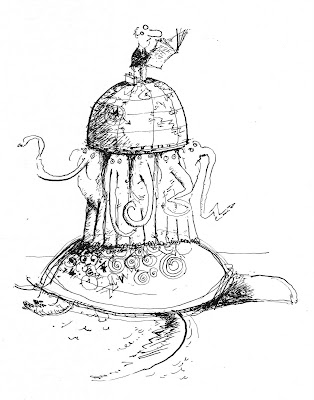 Since I didn't post any elephants on Monday, here are some extra bonus elephants two days late. This drawing's about 20 years old, and it's from an image I'd remembered in a Time/Life book on evolution we had when I was a kid; a creation/universe myth with a bowl shaped world supported by elephants on the back of a giant sea turtle. Terry Pratchett uses the same myth, but his is of course a disc shaped world. It makes sense to me which ever way the world's shaped, as long as I don't fall off it. I think the title of this drawing was The Commuter.
Posted by richardcthompson at 5:09 AM

Are you a Pratchett fan? Not every book works for me, but he's written a lot of them, and many do. You've probably heard that he's been diagnosed with Alzheimer's.

I did, and that shocked me as I'd just so recently started reading him. What a cruel thing to happen to such a creative mind.

We listened to Pratchett's "The Wee Free Men" on cd on the family Thanksgiving trip and enjoyed it very much (excellent Scots accents used throughout). For Christmas I'm giving my daughters several of his books so I can read them too. Which have you read? I started Color of Magic, the first Discworld book, a while back then got distracted, so I'll have to start it again.

Excellent elephants.
I really like the designs on the turtle's shell.

Mel, I'm afraid the big turtle & elephants myth has been thrown down in favor of one with a big duck and some monkeys.

Thanks Josh; I owe you an email.

I heard that too, but that seems like an iffy diagnosis - check back in a few months and I'll bet it's changed.

Actually, Richard, I'd start reading a bit later. In his first few books, he was finding his voice and setting up his world. I've liked his past 5 years worth, which are the most philosophical, immensely. And the Hogfather is out on DVD now - I saw an ...unofficial... copy last year, and it's a good one.

Great drawing! And you know, it's turtles all the way down.

Thanks, Ponto; and you're right, it's just like Yertle.

And glad to hear you're back on your feet again!

Is the JSW (or possibly CSW) an intentional "easter egg"?

This is a great drawering!!
Like chb, I was wondering what's up with the "J(or C"SW" in the elephants' trunks.

Hey, I'd never noticed that before. I'd better think of a reason for it. It was just one of those doodled sketches that worked, y'know? I drew a copy of it and colored it with alkyd paint, but it just wasn't the same somehow.

I love this; you should send it to Pratchett. I love his Discworld books, and am hoping that diagnosis is not true...