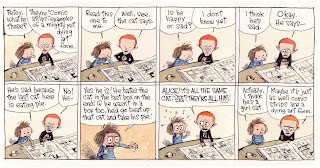 This was drawn for the Post Magazine in early 2007 then redrawn for syndication later that year (I haven't recycled any old strips in a while, I think because I ran out of good ones). To see the syndicated version, plus some nice words by Tom Spurgeon, see this review.


When I first drew this it was instantly my favorite; it's got drama, comedy and meta-ness, and it makes a point that's self-deprecating enough to be self-loathing. All you could ask for from a comic strip! I was looking at this original the other day and realized something. Recently I've gotten obsessive about the shape of Alice's head. I want it to be perfectly spherical, but it keeps getting lumpier and more oblong. I've always had trouble drawing these characters on model and I stand in awe of those cartoonists who can reproduce shapes and sizes from panel to panel effortlessly. Especially someone like Charles Schulz, who designed one of the subtlest shapes in pop culture- Charlie Brown's head- and replicated it endlessly (though there was some gradual evolution in it, of course). But I realized that Alice's head here is a doughy, unformed lump, and it looks better than any platonic sphere ever could. 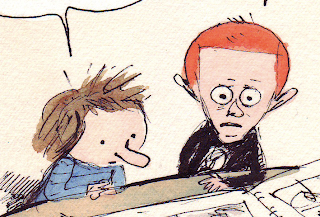 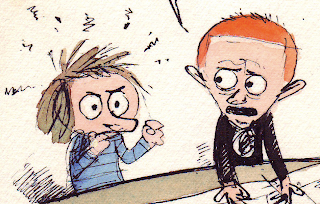 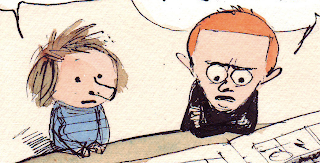 The above Alice is as close to a Platonic ideal of Alice as I can imagine. The drawing is rough and scratchy and the lines seem to have landed on the paper almost randomly. The watercolor defines things as much as the linework does, one of the main differences in the strips drawn for the Post Mag and for syndication.
Posted by richardcthompson at 11:41 PM

This is the first Cul De Sac I ever read, on a comic web site. I've bought every book since. Man, that's a good strip.

great strip... and thanks for the enlarged art samples, love looking at the details!

I just loved what you've drawn above. It's all about good comedy. I've been visiting blogs like this one to see others styles, and pharmacy blog has been posting some of them.