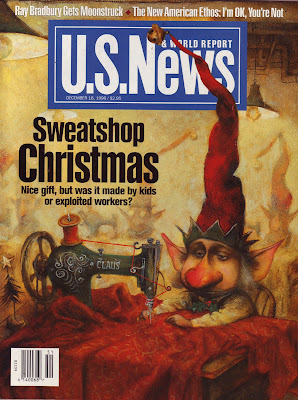 Here are two old bits appropriate for the season, which I hadn't gotten around to posting earlier because of all the #@!% Christmas stuff going on. The above is a cover for USN&WR, now no longer an actual magazine, though at one time one of my favorite clients (in short, they kept me busy every week and paid well). It's in alkyd and casein paint, with some layers of Krylon to force it to dry in time (Krylon has been the savior of many a deadline-crazed illustrator and probably the bane of the ozone layer for years; even Norman Rockwell used something like it). I haven't used that technique in years, abandoning it after I figured out watercolor well enough to fake some competency. In this case, I was trying for an Ashcan School type of painting, to make it look like a turn of the 20th century sweatshop.
The below image was for the American Diabetes Association magazine, another long-time client I haven't worked for recently. DC has associations of every description (there's even an Association of Association Executives) and all of them have or had a magazine or newsletter that used freelance illustrators. You could build a pretty good career working for them, and before I got more into purer (ha!) cartooning, I did a lot of work for them, almost as much as I did for the Post. 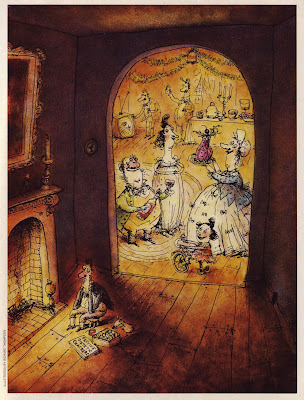 This is in alkyd too. Alkyds are somewhat like oils, though their texture is a little tarrier they thin with turpentine, but they use a resin instead of linseed oil as the vehicle for the pigment. They also dry faster than oil and you can use them on paper, which oil will eventual corrode. So they're well-suited for illustration work. The way I used them was this; I'd draw a rough in ink on a thin, semi-translucent layout paper called Ad Art, once made by Beinfang (but alas, no longer, I loved that paper), put another piece of Ad Art paper on top and draw a more finished (but still loose enough) final, then spray mount it on a piece of 2-ply Bristol board (it had to be pliable to fit on a drum for scanning). Then I'd put a first layer of alkyd using Winsor & Newton Liquin (a thixotropic alkyd gel medium) mixed with some warm tint, like an ochre or something, and work some details a little with colored pencil, which would somewhat liquify and mix with the Liquin. Then I'd let it dry, maybe spraying it with Krylon, and do another layer of color and another, etc, building up a bunch of glazes, which gave it a nice depth. And what did I use to put the alkyds on the paper? My favorite tool was a little wad of the spongy foam rubber they put under wall to wall carpeting; I had a giant roll of it and I'd just tear off a suitable piece. That and Q-tips. Silly as it sounds, it wasn't too different from what others have used over the years. Casein paint, a milk-based paint, would stick well to the Krylon (if it was matte Krylon) and was useful for detail work, like the red threads in the sewing machine in the image above. When it was finished I'd have a pretty snappy looking little painted art objet. But it was time-consuming and smelly and messy, none of which you want on a deadline. And when we suddenly had a baby around, I wanted something less toxic.
I'd been leery of watercolor for years as I thought they were difficult and unforgiving. So I started with them fairly slow and easy, using only a few colors, a couple of warm colors and a blue maybe. The first watercolor I did under a deadline was a little drawing of Colin Powell for the New Yorker; it had maybe 3 colors in it and looked just fine. I learned a few simple rules and tricks. All colors handle somewhat differently, especially in a medium with the immediacy of watercolor, and as you use them their personalities reveal themselves. I still don't know exactly what I'm doing, but nobody's caught on yet, and I'd appreciate it if you didn't tell them.
This has been your art lesson for today.
Posted by richardcthompson at 9:34 AM

Thanks for the art lesson! That's a gorgeous painting at top.

I pretty much swam in Liquin in art school (but somehow never developed any petroleum-based superpowers.)

I love your blog, and I know virtually nothing about the tools of your art, so…

What the heck is “milk-based” paint?

I love your pencil art, but when you go colourful, the result is marvellous...

Very interesting, Richard. It's amazing to me what you can do. How long did a USNews-type piece take to paint?

B, thanks! Yeah, I've still got a bottle of Liquin sitting on a shelf in my studio. Someday it'll come in handy.

Andy, thanks! Casein paint uses milk casein as a binder; it's an old technology and has been used as house paint and stuff like that for centuries. It's kinda like Elmer's glue, which is also milk based. It smells pretty good, too.

Mike, it probably took about three days, maybe four. I was trying for it to look like an Ashcan-style painting, which it almost does. (I'm going to add that to the post...)