According to Alan Gardner's indispensable Daily Cartoonist, November 16th marked the 45th anniversary of Parker & Hart's The Wizard of Id. So I've missed it by less than a month.
The first cartoonist I ever saw in person was likely Virgil Partch, in the early 60s at a car show in DC. He was sitting at a little table signing little books of VW cartoons and my dad took me over to watch him. It was memorable; I know because I remember it, he was wearing glasses and a crewcut and I got a copy of his book, which may well be up in my Dad's attic. I remember it being printed on black paper with white type.
The second cartoonist I ever saw in person was Brant Parker, who drew The Wizard of Id. I was in high school in Gaithersburg MD, taking a journalism class from the wonderful Mrs. Molly Christie, and she had Brant Parker's phone number. Brant lived in Virginia and had a studio on Lee Highway in Vienna. One assignment for class was to interview someone, an actual adult. I was on the school paper, the wonderful Blue & Gold, so if the interview was any good it might run in the paper. Mrs. Christie gave me Brant's card and said, drop him a line. So I did, though I don't remember what I sent him, and he replied thusly- 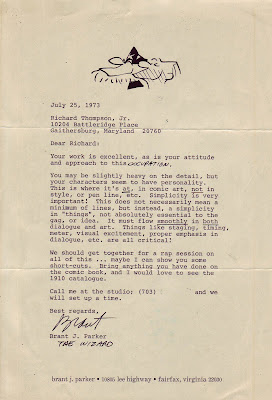 And I called him. I know this because on his letter's envelope I've carefully written a script for my call, starting with the opening "hello Mr. Parker my name is Richard Thompson." The script must have been compelling because he invited me down to his studio for the above mentioned rap session. There must've been some lag time between his invitation and our eventual meeting, but my life is full enough of lag time, so I don't remember the time line too well.
But I went to Brant's studio. I took along a tape recorder and an empty cassette, some drawings to show him and a list of questions. My dad drove me down, as I think I only had a learner's permit at the time. The address, 10805 Lee Highway in Fairfax VA, was (and is) about a dozen or more miles west of DC, and Gaithersburg was (and is) about 25 miles north of DC, so it was a bit of a hike. 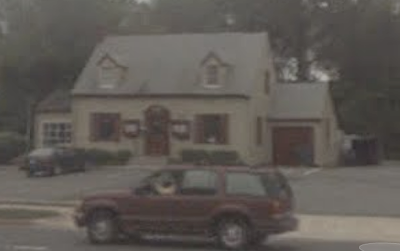 10805 was (and still is, almost; the above is a Google maps screenshot) a little Cape Cod style house. The downstairs at the time was a saddlery (Fairfax is on the edge of horsey country) and I stepped inside to the rich smell of leather and soap. Immediately inside was a staircase going up to a short hall and I headed up. If I remember right, Brant had the whole upstairs for his studio; I think there was a door with a picture of the Wizard on it. If so, I knocked on it.
Brant answered. He had a moustache, great eyebrows and kind eyes and he was affable and twinkly and immensely droll. I guess we went through a handshake and pleased to meet you and I love your work and all the usual niceties. Then I sat and listened to him answer questions, all the usual ones, and describe his work process, pretty much the usual process, and tell funny stories. And I remember what his studio looked like; it had a kitchen and an American flag on the ceiling and a TV that he kept on with the sound off (as inspiration, he said) and there were drawings everywhere. He showed me a Sunday page he was loosely coloring with watercolor as a rough guide. It had the character Robbing Hood in it fairly prominently, and some trees. He told me he colored the various greens in first, because Robbing Hood had to be green and so did the trees, then added the other various bits. It made sense. And he showed me the roughs leading up to it, and the numbered color guide the printers would use (still a mystery to me, though I've learned to fake it).  I kept my tape recorder on so I could transcribe this into some kind of article form for the journalism class. I guess the cassette probably resides in my dad's attic too.
Mostly I was kind of dazzled to be in the presence of so august a personage; someone who could turn out an actual comic strip, a certifiably great comic strip. I'd always liked the Wizard of Id. The loose, handwritten style appealed to me and the dark humor often cracked me up. I'd researched the strip some for my article, and one source commented on its rather grim nature, pointing out that the strip was populated by failures who hated each other, and that only Bung the jester was redeemably human. Which may be a little harsh, but Id did traffic pretty heavily in harsh material; hangings, petty human vanity, cowardice, dictatorial royalty, and on and on. In short, the best kind of comedy.
I think we chatted for about an hour and a half. The interview I wrote for the journalism class got an A (I think) and appeared in the Blue & Gold. I hope I sent Brant a copy. We had a good school paper under a good editor, Mary Kay Kruzel, and the little newspaper . Without that paper, high school would've been a lot harder to get through and a whole lot less fun.
Years later, when I'd started freelancing around DC, I'd bump into Brant now and then at an infrequent cartoonist get-together. He once gave me a ride in his big car to a bar where various cartoonists were meeting, and I reminded him that I'd visited his studio years earlier, but he didn't really remember it, though he was affable and droll as ever, though lacking the moustache. In 1996, at the NCS Reuben dinner in New York, I won the divisional award for best newspaper illustration, and by sheer chance it was Brant who handed me the little plaque and shook my hand. He, of course, had won the comic strip division award in '71, '76, '80, '82 and '83 as well as the Reuben itself in '84 and the Elzie Segar Award in '86.
He died in 2007 after a long illness. I'd lost track of him and I feel bad about it for all kinds of reasons, not the least being that he was one of the first cartoonists ever I saw in person.
Posted by richardcthompson at 3:12 PM

I interviewed Johnny Hart a few years ago and he spoke with warmth of what Brant Parker had meant to him. I'll send you copy. Meanwhile, it's good to remember these odd little moments. How many young artists was Parker kind to who never took that next step? What difference does it make? Maybe his kindness is the difference between where you are now and where you might have been otherwise. And, if so, on behalf of Cul de Sac fans everywhere ...

What a great story. Thanks for sharing!

I really enjoyed reading your post about Brant Parker. My heroes have always been cartoonists. In the mid-sixties I met Al Capp, Mort Walker, Brant Parker and Johnny Hart at a presentation sponsored by the local newspaper. I was too shy to fully engage them, but I still have their autographs and a King of Id sketch Mr. Parker drew for me.
Now, a zillion years later, I'm still in awe of cartoonists even though I'm a member of NCS and CAPS.
It was a pleasure to meet you at the Comic-Con.

Thanks for sharing that. What a wonderful little remembrance.

A moving story...so cool that you still have the letter he sent (and your own handwritten interview notes!).

Were you also a cartoonist for the Blue & Gold?

That was a very nice story, and I'm glad that you were inspired to become a cartoonist so that we can enjoy your wonderful strip.

That said, as I'm sure you are aware, in recent decades "Wizard of Id" has become one of the worst comic strips published in the paper. It is indifferently scribbled, features half-thought-out non-sequiturs masquerading as jokes, repeats the same formulas over and over and over. All the hallmarks of joyless, assembly-line hackwork. The only worse strips these days are "Crock" and "Hagar."

But I'm glad Brant Parker was nice to you when his work was still worthwhile.

Excellent story. What's the 1910 catalogue? Do you remember any more?

Thanks for sharing this wonderful memory, Richard.

When did all of this take place? I was in Mrs Christie's English class at G-Burg to, 1973 or so. I also knew her sister Ruth here in Williamsburg later on.