I was going to write something lengthy about children's literature but I don't have a whole lot to say. My house is stuffed with children's books, and some of them predate my daughters. I've read a good bit of them, often aloud to an appreciative audience. Oswaldo Twee, the children's author I invented for the strip who produces an endless series of books about Fontanelle the Imperiled Infant, is pretty clearly based on Lemony Snicket, whose works I find alternately entertaining and annoying. I never made it all the way through one of the Unfortunate Events books, though I heard a few on cd and mostly enjoyed the movie version. I'm pretty sure I'd feel the same way about Oswaldo Twee's work, and Alice is even less forgiving.

In the last strip in this series I tried to show how kids will talk in, you know, questions? Like they want to make sure you're listening? So each sentence? Demands a response? Adults sometimes do this too. Or at least, I do. You know? 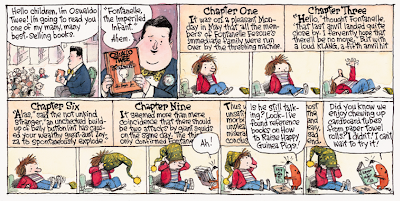 These are all in that book I mentioned below, too.
Posted by richardcthompson at 1:24 PM

On the subject of "uptalk", you should read this: http://languagelog.ldc.upenn.edu/nll/?p=568

Petey appears to be having some sort of episode in that last panel.

y'know I just got back from Napa/Sonoma and we toured this winery where one of the wines was called "Episode". Someone told me they sorta made fun of that name behind the scenes - as in "I feel an episode coming on" or "I think I'm gonna have an episode" Petey TOTALLY embodies that wine. HE shoulda been on the label. I came here to leave a comment about him and then matthew summed it up so perfectly I laughed out loud at work and it's the guv'ment and no one laughs here. I'm getting odd looks... I think I'M beginning to have an episode...

I have been informed that, for my birthday, a copy of "Cul de Sac" the book will be coming whenever Amazon deigns to ship it. I can't wait!

"I have the bite radius of a hammerhead shark. So you don't want that." nearly made me spit my dinner out.

For good reasons, not bad.

I never made it through the third Snicket book, but I must give credit where it's due: Book 2 contains a truly inspired bit of business. I just checked -- it's in chapter 11. I can say no more.

(CdS book order was, foolishly, Amazon-linked to two books due to be published next month. Tick tock.)