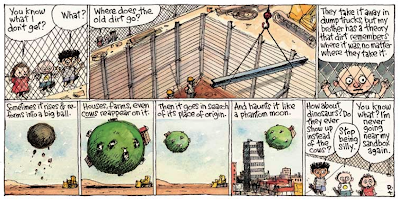 The above is another page taken from the mysterious disappearing Cul de Sac book (which I saw on an actual shelf at a Barnes & Nobles, who seem to've cornered the market on them). And it deals with dirt, which somewhat continues the conversation from the post below.

Back almost 30 years ago I read a short story by the tall-tale sci-fi fabulist R.A. Lafferty called "You Can't Go Back". Like all of Lafferty's work it's hard to describe, but briefly it's about this little rogue moon called the White Cow Moon that will come bobbing over the horizon and float over your head when you blow the White Cow whistle, and how some now-adults who played on it as children visit it for the first time in years. I'm sure I'm misremembering details, but the White Cow Moon disappoints them; the troll who lives in the moon's core looks moth-eaten, the little village is ramshackle, the whole place looks fake, like a beat-up amusement park (like I said it's hard to describe). And I always wanted to steal that idea, of a little untethered moon that shows up sometimes then wanders away. This cartoon is as close as I've gotten, and I even worked cows into it. Alice's final line is thanks to my old editor at the Post, Tom Shroder, who taught me that ending a comic strip with an unexpected tangent is always the most fun.
Posted by richardcthompson at 5:20 PM

There is some sort of concomitant in the Italo Calvino collection called t-zero about revolving in space and recognizing you r own particular place on the planet as you pass it. There is also a wonderful collection of children's stories called the spider's palace by the man who wrote a High Wind in Jamaica - they have that warped logic feeling.

Another wonderful sunday. It would make a great short story. (have you written short stories along the way?) I've never read that Lafferty story, but I'll keep it in mind. You mention that going off on a tangent in your punchline was good advice. Lafferty did the same thing, not reserving his tangents for the ending.

Fantastic. A comic strip that references a rogue moon AND dinosaurs. There must be some sort of cartoonist bingo that you're playing.

Artsparker, I haven't read any of those you menioned, though my wife has some of Calvino's books around here. Oh boy, more to read! Or at least, start.

CWW, I figured you'd know Lafferty. The short story "Narrow Valley" is my favorite by him, and "900 Grandmothers". Somebody said that if RA Lafferty didn't exist, we wouldn't have the imagination to invent him.

1. I also got the shipping notice from Amazon. Since it's coming from their Delaware hub, it could be here tomorrow.

2. I also saw a copy at B&N today. I had to withhold the temptation to read it.

Can you imagine how weird a movie based on a Lafferty story/book would be?

Doris Piserchia was weird in the same way.