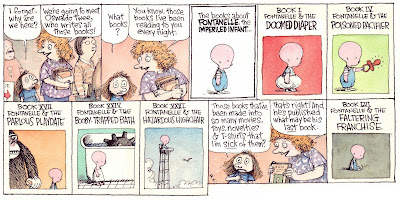 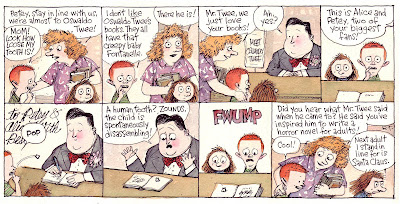 This was Oswaldo Twee's first appearance, a year or so before he reappeared to read at the library, much to Alice's dismay. From his reactions here, I don't believe Twee has had much contact with actual children which, from the others I've met, isn't the norm among children's book authors.

Both my daughters read a lot, sometimes too much, like to the point of trying to multitask while reading and subsequently falling down the stairs. This only happened once, but it was memorable, and no harm was done so it was also funny.
Posted by richardcthompson at 9:13 AM

hahaha, the fontanelle books are excellent.

These two Oswaldo Twee strips - and the wonderful mournful cow strip from 2006 that's trying to pass itself off as new in today's paper - made me realize just how many are missing from my shiny new Cul de Sac book. Just how big would your first book have been if it incorporated everything? Would it have put my Complete Calvin and Hobbes set to shame? How many did Watterson make you take out before he agreed to write the forward?

David T, I should do the Fontanelle books as spinoffs. Maybe they'd win a Caldecott.

Randy, I've been busted on the mournful cow. I didn't think anybody was paying attention. So you bought that book, huh? If it had all the old strips in it, the whole thing'd be about a hundred pages longer, still well short of Watterson's mighty epic.

I saw No Exit at Powells today; Portland represents.

Dear Mr. Thompson,
Just wanted you to know you have a huge new fan in Chicago. The Sun-Times began running Cul-de-sac amonth or more ago and I couldn't be more delighted. The funky draughtsmanship and the squeaky, quirky kids are something I look forward to every day.
On a sadder note, the Chicago Tribune just this week dropped Wiley's Non-sequitur strip. I praised that strip also for its biting adult humor and excellent drawings. Chicago's loss.
In any case, allow this belated welcome to Chicago. All the best to you.

Did you know Zounds is short for God's Wounds? Probably you did. But I didn't find that out until this summer.

I'm definitely getting my mom a Cul-de-Sac book this holiday season. And probably a few other people as well.

Greetings from KC/hope all is well/congrats on the anniversary of the strip!