Gene Weingarten: As I recall, Richard’s Poor Almanac(k) originated over a lunch between us. I was the editor of the Sunday Style section of the Post. I was looking for a weekly feature to attract readers who were both smart and smart-alecky. Something both sophisticated and and seditious. I told you I wanted to pay you generously to draw a weekly, anarchic comic strip, with no creative limitations, and you agreed it was a swell idea, and you’d get right on it, and we shook hands, and then I didn’t hear from you for something like two years. What was that all about?

Richard Thompson: Yeah, I remember that restaurant. They gave us both bacon on our cheeseburgers and we didn’t even ask for it. And when we went there a year later they did it again. Auspicious. As I’ve said before, I’ve had three or four real dream jobs as a cartoonist, And I’ve been dragged into each of them kicking and screaming. I’m naturally slow and lazy and I really hate deadlines. Just the thought of deadlines stretching endlessly away, the kind that come with a daily strip, makes my stomach turn over, because I imagine a lifetime of 3 A.M.s at the drawing board looking at a drawing I’ve screwed up for the sixth time, and I’ve forgotten how to draw anyway, and what was I even thinking taking a job like this?

Also I thought if I waited long enough you’d forget all about it. This happened once before, in the late 1980s. I had a somewhat similar offer from the Outlook section when Jodie Allen was editor. And they didn’t offer as much money. I came up with some rough ideas, including an early version of “Little Neuro” my parody of Little Nemo in Slumberland, but it was undeveloped and pretty obvious I didn’t know what to do with it. I didn’t pursue it and neither did they. Small loss and no regrets. 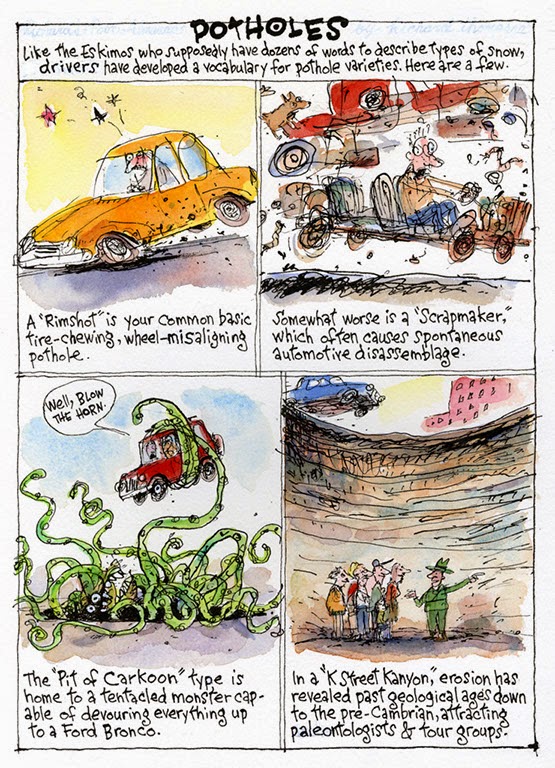 And I do most of my work subconsciously, when I’m not paying attention to the process. If you’d pestered me every week for ideas (which I’m glad you didn’t) I would’ve come up with something, but it wouldn’t have been too good. It has to age, preferably without me meddling in it. This is nice because I get to dawdle. But without an eventual deadline I can’t get anything done. Somebody has to take it away from me and say, stop fussing with it.

GW: The thing I liked best about the Almanac was its unpredictability -- the reader never knew where you were going to go, week to week -- and I’d like you to explain that a little bit. (Yes, you and I both know I am asking that obnoxious dumb-reader question, “Where do you get your ideas?” but I’ve concealed it through misdirection, and you have to try to answer.)

RT: I never knew where I was going either. Quite often I’d have an idea on Tuesday that I hated on Wednesday (deadlines were Friday). If Thursday rolled around and I was still dry it got ugly; I’d have to sit down and sweat it out. I was always bad at planning ahead because I knew I’d change my mind by deadline time.

Of course, there are always holidays, events, anniversaries and other calendar happenings, or I could try a Restaurant Closings cartoon. Perennials. After I’d done it for a while I felt confident enough to do some really stupid cartoons just because I could make them funny. Stuff from real life, the duller the better, things that would be unworthy of space in a major newspaper. Like when we had opossums invading our garage I did a whole life-cycle of opossums and worked in Henry James somehow. The ideal cartoon  was made up off the top of my head with no research, with only its own comic logic holding it together.

I eventually felt like I could tell when a subject had comic possibilities; that is, when there was a rich enough vein of jokes in something that it’d stand the scrutiny, the analysis, the deconstruction, necessary to turn it into a cartoon. Like, if it rattled loudly enough when I shook it. But I couldn’t force it to be funny. One thing I’d learned after doing this for a while is to back off fast whenever I was forcing it.