It's time to claw our way somewhat closer to present-day.

The pre-Alicians were first mentioned in early 2009.

Or more likely, the hairdo is immortal and Miss Bliss is its present avatar.

Petey's semi-aversion to being photographed was first shown here.

Marcus briefly had his own blog, putatively run by his mother, until a certain unnamed person lost interest in it.

This could've been expanded on. And I wish I'd pulled the face in that second panel even more. It looked more distorted when drawn at 5 inches tall, the usual size I draw these things.

Boy, now that plot will really take off. 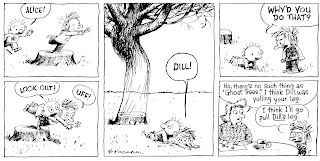 Trees are among my favorite things to draw. I may drop the human characters from the strip and introduce a flock of comic birds so I can draw trees all the time.
Posted by richardcthompson at 11:29 PM

I love these little trips into your mind. Really - they're not scary at all!

The nice thing when it's been a while since you've explained the strips is that I've forgotten them all and it's like reading them fresh again!

Who says ADD is a handicap?