My friend David Hagen has been casually globe-trotting for the last few weeks, getting as far as England and Belgium, where he visited the Musée de la bande dessinée in Brussels (the Belgian Comic Strip Center for those of us whose French is poor). This looks to be about the most elegant cartoon museum imaginable, and there's a bookstore on the premises called Slumberland that David says is as nice as one would expect. And look what he saw on the shelf, in amongst some collections of better strips- 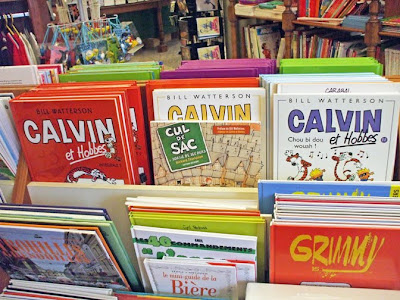 Posted by richardcthompson at 12:16 AM

It is interesting because the localized editions of the Calvin and Hobbes look they have completely different covers (at least covers I don't recognize), but your copy of Cul de Sac is the same but with french translations. Maybe they've stopped changing covers with the newer books?

Also, I can only hope that the book labeled Grimmy is the French edition of Mother Goose and Grimm.

The Calvin et Hobbes editions were strange smaller hardcover collections en francais. Most of the european collections are nicely published in hardcover. You're correct that Grimmy was a weird collection of Mother Goose strips. We were excited to see Richard's collection nestled among Calvin and Hobbes. We are the world.

Richard, I assume you meant the beer guide was intended as the better strip? ;-) Only in Europe would people allow the unadulterated mixing of "cartoons" with beer guides, although why a guide to beer has to be rendered as a BD ("bay day" in French slang for "bandes desinées" = cartoon) has me stumped. Martin

Hardcover Calvin & Hobbes! I'm jealous.
And don't be too modest Richard, Cul de Sac is right where it should be in amongst the classics.

sorry to be the one who does that sort of thing, but the proper spelling is "bande dessinée". basically there's an S that's not at its proper place. :)

other than that, to answer david hagen: the french calvin & hobbes were first published (like, 15 years ago?) in softcover version & the artwork was in fact closer to the english originals. but then they did this new edition which i think is chronological (sort of a milked-down version of the monstrous 3-volume thing that came out a few years ago), hence, i suppose, the new unrelated covers.

for a long time french publishers were adamant in keeping their own designs, formats, etc., which means that the european editions of US material were often surprisingly repackaged. whittles is right to suppose that the current trend for some publishers (including cul de sac's publisher delcourt) is to follow more closely the original artwork/format/etc.

To all who helped out with spelling and such- Merci! It's now fixed.