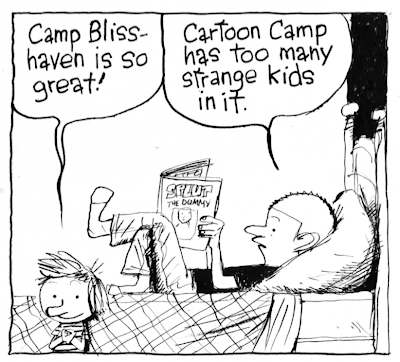 A close reading of today's Cul de Sac reveals that Petey is reading a comic called "Splut the Dummy." This  is one of the rare instances when a character in the strip is based on an actual person, as Splut the Dummy is a life-sized stuffed doll my wife made for some children's theater classes she's taught. Splut was originally built for a fifth grade production of As You Like It, where he was a stunt double for a fight scene. Despite losing his head during a particularly vivid performance, he's gone on to appear in dozens of shows in many roles in works by everyone from Shakespeare to Roald Dahl.
Right now he's sitting in a corner of the living room wearing jeans, some kind of renaissance tunic and a sombrero though I'm not sure why. He often makes visitors jump when the see him out of the corner of their eye, and me too for that matter. That's probably what he does in the comic Petey's reading; disconcert people.
Posted by richardcthompson at 11:03 AM

No photos of Splut? Oh well.

Loving cartoon camp. The 8-yr-old in me has a mad crush on Loris & her rubber bands.

They canceled one of Beethoven's performances. He was disconcerted.