Your Unnecessary Spot Illustrations of the Day, Caricature Division 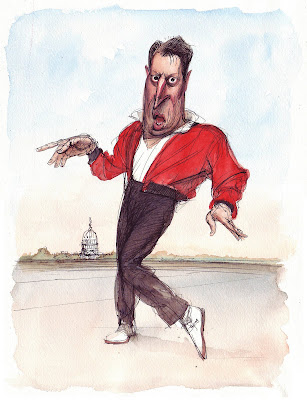 I spent today in one of those fits of pretend tidiness where you don't really clean things up, but rearrange them into new piles, then find a book you'd lost and read that instead of even pretending to clean up and then end up taking books off the shelf and strewing them all over the floor and then it's dinner time and then you don't get back to it and then, you, um. I lost my train of thought. But anyway, I took some old drawings out of frames that had never gotten hung up with the idea of putting newer drawings in them and not hanging those up either. And I took this one out. It's Al Gore from about ten years ago, done for USNews & World Report, and for some reason he's imitating Elvis. I remember doing this, finding the photo of Elvis and getting Al's expression just so, but I don't remember what the context was; something about Al Gore trying to funky up his image when he was running against GW Bush. But it does make a nice conversation piece, I guess, if you're trying to start a conversation on the intersection of Al Gore and Elvis Presley. 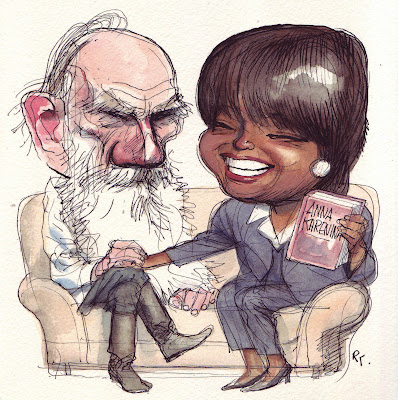 Speaking of unlikely intersections, I found this in a drawer. It was for the last page of Smithsonian Magazine about 5 years ago to illustrate a funny piece imagining Leo Tolstoy appearing on Oprah to shill for his book Anna Karenina. Tolstoy is a peach to draw, with that massive beard and big wedge of a nose. They don't make faces like that these days, of if they do, the don't put them on authors.
Posted by richardcthompson at 9:08 PM

Pretend fits of tidiness! Tears in my eyes, & I don't think they're from laughing.

Remarked lately on the pleasure of drawing facial hair. I don't think I was taken quite seriously.

(West Side Story? Maybe it was Sha Na Na.)

That's what I call a very productive day...