In honor of Father's Day here are a few very early Cul de Sacs with some floundering attempts to delineate the character of Peter Otterloop, Senior. 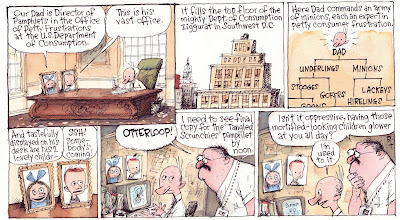 The Post Magazine strip was more explicitly set in DC than the syndicated version so Mr. Otterloop's government job was a slightly larger part of the strip. My dad had worked in government off and on for years, mostly in fields related to public health, and I knew a bit about the workings of regulatory agencies from him. And I'd done freelance work for a few places like the FDA and USDA. Back in the 80s I did a bunch of illustrations for a magazine called Food News for the USDA and went to meetings in their main building called the U.S. Agricultural Research Service, a big old place that mingles with the Smithsonian and Freer Gallery on the Mall. The meetings would be on the top floor, away from the fancier part of the building which includes the Secretary of Agriculture's office and a huge lobby. Up there were long echoey corridors, high ceilings, skylights overhead and doors with transoms. It was kind of remote and peaceful and I liked it and I liked the people who worked there. So I put Mr. Otterloop in a similar place. But I never really developed that side of the strip. Office humor isn't my forte, others do it much better, and Alice kept interrupting whatever else I tried to do with the strip. 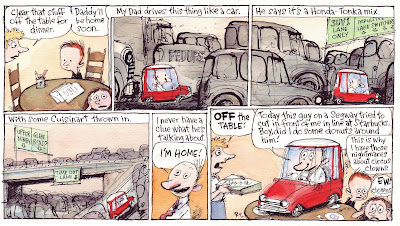 I did give him a puny car early on. This was from March of 04, predating the previous strip by a month. 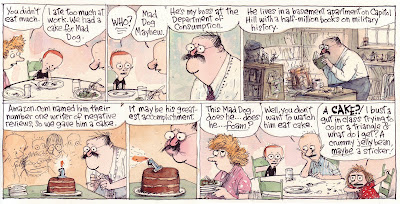 And I tried to give Mr.Otterloop more of a personal milieu once or twice. This is from November of 05. Mad Dog Mayhew was based on several people, not the least my late friend Joe Mayhew, who worked at the Library of Congress for years and who knew more about South American literature and science fiction and everything else than anyone I've yet met (though I doubt he liked military history much).

So these were some early attempts to enlarge the strip before it'd quite found its focus. The characters aren't yet who they were later on and the gags and pacing is clunky. And Mr. Otterloop looks like a bug in those first two. I was going to add a final sentence starting "But...", but I can't think of one.
Posted by richardcthompson at 8:25 PM

Labels: but the yacky kids took over the strip

Yup! I was drawing Gene sometimes when illustrating his column in the Post Mag and though it'd be fun to have him cross over.

"...but without the evidence of our embarrassing juvenilia, we'd forget how far we've come since."

Maybe you could leak these strips anonymously as the "Bad Quarto" Cul de Sac. Have future generations of scholars puzzling over things like why Dill was originally named "Corambis"...

So Madeline Otterloop is decended from Leopold and Molly Bloom?

"So Madeline Otterloop is decended from Leopold and Molly Bloom?"

From Molly, certainly. From Leo...well... That's what she's always been told.

They're all so great! The first one really made me laugh (that last square was a classic) :D