Sam, the Boy Who Talks to Animals

This old Almanac was an idea that went kinda nowhere. Though it did lead to Petey, and the rest of Cul de Sac. I drew it in the early 2000s and when I turned it in Tom Shroder, then editing the Post Magazine, asked me if I'd ever thought of doing a strip with continuing characters. Wisely, I said no, but it did make me think about it, if only for a minute.
The concept of this one was having a kid who could talk to animals who are never much help and yammer on until he'd wish he'd kept his mouth shut. This would drain the magic and fantasy out of the whole idea of talking to animals and also be a real rollicking hoot. It wasn't much of a rollicking hoot and this was a far as it got. The kid, Sam, was from a character played by Bruce McCulloch on Kids in the Hall, a serious, non sequitur spouting, little boy named Gavin with a backpack. In slightly different form he turned into Petey. And like I said below, birds are fun to draw. 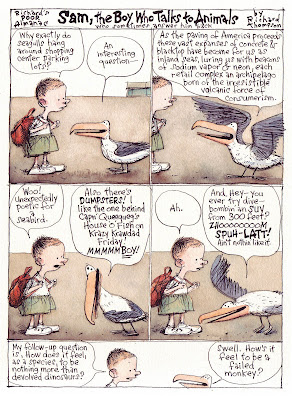 Posted by richardcthompson at 9:54 AM

Um, now that you mention it, I guess I am a failed monkey...

First, my genealogist says one of my ancestors got tossed out of the herd for taking too many banana breaks, now this. Is it too late to become a failed daisy?

This made me laugh real hard.
Failed Monkeys ftw.

We're not failed monkeys. We simply rephrased our objectives to make them conform to our results.

So I guess you want me to paint your chair now.