The Late Gentleman from North Carolina 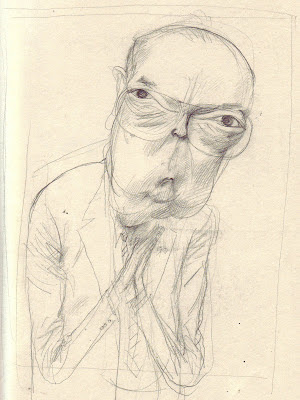 Several times I've started the sentence "I don't wish to speak ill of the dead, but..." and then been at a loss as to how to continue. So I'll just say, Here's a sketch and a painting of Jesse Helms I did about 14 years ago for Mother Jones. I like the sketch more than the painting, which is egg-tempera & oil on board, a Renaissance technique I was trying to learn. It seemed perversly fitting to do a Cro-Magnon man in Renaissance Man style. I also started one in the style of a religious icon, with (dutch) gold leaf and everything, but I never finished it. But now I don't feel the need to, so I guess I've moved on. 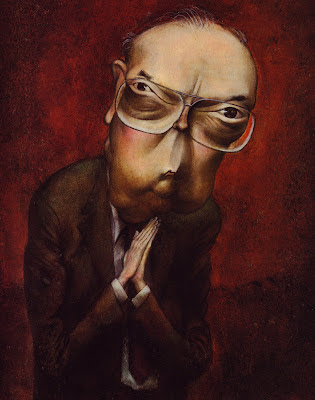 This is scanned off a magazine tearsheet, but it's pretty close to the original. I gave the original to my friend Nick, whose uncle once ran against Helms, because it gave me the creeps.
Posted by richardcthompson at 4:18 PM

Wow. When this page first loaded I thought I was looking at a conceptual sketch of an alien for the upcoming X-Files movie ... just a second before I recognized it as Helms.

Richard, is there any style you can't do?
That painting is so great!

Beautiful sketch! If such a thing can be said, considering the subject.

Sorry about the incomplete link...

Nice likeness - sketch and painting. You caught all his depth, wisdom and warmth.

If you have nothing nice to say...draw a caricature.

Seriously good drawing. Now post something else so I don't have to look at it any more. It gives me the willies.

Ack! I have the heebie jeebies

Yikes, me too. Time for something new...