The following is a repeat from October 8th, coincidentally my birthday. I offer it again because first, it deals with important issues that I as a cartoonist face daily; second, because when you google-image search "Hunt Imperial nib" this post shows up first; and third, because I'm going outta town on Thursday and I'm scrambling and this is all I got. But I've updated it some with useful information. 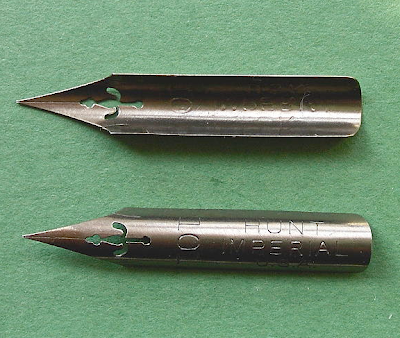 Ooh, lookit that baby! The Hunt #101 Imperial nib, excellent for penmanship, copperplate calligraphy, ornamental work and funny cartoons. With its dual shoulder slits, fleur de lys vent hole, compass, and this thing in the stock that tells time, it's a cartoonist's best friend. Unless, of course, the tip is a little bit askew or there's something wrong with the tines, or it's got a little schmutz in the main slit, in which case it's an evil, twisted, deceitful little monster who'll screw up every drawing it puts its point to, dribble ink down the sheet and break your heart. And you know what the difference between a good nib and a bad one is? It's microscopic! You can't see it! But you'll know it the instant you put the nib to paper. And don't get me started on brushes.

Update: how to give yourself an inadvertant jailhouse tattoo. Here's my method. I draw something in pen & ink and screw it up somehow, and this makes me pointlessly mad. So I take the still ink-loaded nib pen in my right, or drawing, hand, and jam it into the papere towel I keep in my left, or non-drawing, hand. And I do it a little too hard, so that the still ink-loaded nib goes a good quarter inch into my left palm. This leaves a small permanent mark, which could be called an idiot's stigmata. I got mine about 17 years ago and it's still vivid, and whenever there's a lull in the conversation I'll show it off. I know at least two other cartoonists/illustrators who have something similar. Which only proves that cartoonist/illustrators are likely to get pointlessly mad at inanimate objects when they screw up a drawing.

And per a previous comment; I feel that "nib" is short for something, like "nibben" or "nibboleth". Discuss among yourselves. Winner as always will have his/her comment published in a popular blog of my choosing.
Posted by richardcthompson at 8:32 PM

Labels: and they were talking about plagiarizing your own work over at dailycartoonist.com

I just feel the need to say ouch. Ouch!!

At least when you repeat, you don't try to hide it.

Looking forward to your panel on Friday at HeroesCon.

found u via comics reporter- u r RILLIANT(somhow , i guess my keyboard is against capital b's!)

your watercolor techniques are really quite lush.

So where could I buy some of these?
Any art store will have them?

I know a nice little art store in Concord, NH that sells them. And a few places in southern Maine.

Stabbed in the leg with a pencil in 4th grade. Still have the blue dot 25 years later.

Thanks, Paul. It's all better now. Except for the cool scar.

Albertine, they're not too hard to find. Somebody's got a bunch on ebay. And dickblick.com has them. They're not as easy to find in actual art stores as they used to be, but they're out there.

Jason, Ouch! I'd hate to see the other kid.

Jason: We're not acquainted but you are the only other person I've ever met w/ a lead tattoo. I've got two and both were Eberhard Faber #2 accidental self-stabbings: one on my thumb and the other one on my elbow. That one took some doing.

This is not a job for sissy's.

Long-time owner of two lead tattoos stigmata located in center of each palm. Second installed while demonstrating how I got the first. Brilliant, I know. The only visible scars not inflicted by the Sisters of St. Dorothy.

Daniel V.: Richards' site is fast becoming an e-harmony conduit for lonely cartoonists (w/ out the $40 activation fee.) Let me hear from you:
mlester101@comcast.net

And as long as we're on about tattoo's: complete strangers have stopped me and asked if I would design a tattoo for them. The gravity of that request is boggling. My own wife won't even let me give her a hicky!

Yes,let's add "bringing lost souls together" to Richard's list of talents. Could forming a religion be far off? Church of the Cul de Sac. I'm in.

Still laughing at the "hicky"... priceless.

Went out and purchased some Hunt 101s after reading your post and damned if it isn't a fine, fine nib. They'd been staring at me from their tiny bins at the art store and I'd tried most every nib except the 101s somehow. Thanks for the heads up. Timely advice, too, as I'd just been looking for a nib with the wide line variance of a crow quill but with a more easy manoeuvrability. Beats the Brause 66ef that was my previous fav.