Make the Pie Higher is something from a simpler time, when it was sufficien to make fun of Bush's tongue-tied pronouncments instead of tearing him a new one for his disastrous policies. It was drawn the week of Bush's first inaugural, when the lack of an Official Inaugural Poet who'd read an Official Inaugural Poem caused a mild controversy. It's a free verse poem assembled from old Bush malapropisms, and when I did it I was a little nervous that it made no sense and not much of a point. But it leaked out on the web and got a little notoriety, and it got set to music five or six times. If I knew how to market this stuff I'd've made some money, but as it is I'm glad that whoever first posted it on the web put my name to it, though mistakenly elevating me to a Washington Post writer. The drawing hasn't been published since its first appearance 7 years ago and for a while it was lost somewhere in my studio, which swallows drawings at a volume way out of proportion to its size. 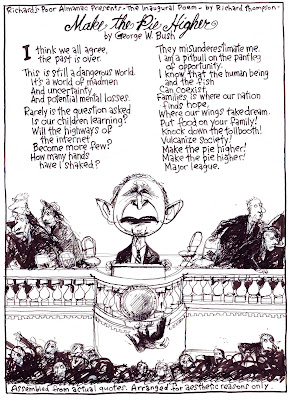 See also here.
Posted by richardcthompson at 8:24 AM

Labels: Lot of white-out in this thing

Glorious. I'll have to search out those videos!

Thank you! I've been looking for it's "original form" for months!

Wow...I'd seen this poem before elsewhere. Who knew!

One of the musical settings was by a guy in Ireland and I'm thinking it'd make a great song for any eventual pub crawl.

These days whenever Bush opens his mouth to reassure us about his economic/Iraq/whatever policy, I only hear the voice of John Cleese insisting, "It's just a flesh-wound!"

I thought this was actually quotations from the ravings of the 3rd mate of the Titanic when he was told that women and children didn't include him. Are you sure that you did this first?

stop it you bad man