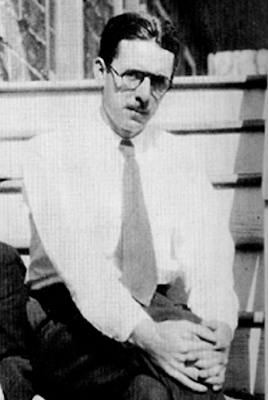 I live in Arlington, Virginia, which is both a town and a county. About a mile west from my house is the county line beyond which is the city of Falls Church, Virignia. If you head in the other direction and go four miles east you'll cross the Potomac and then you're in Washington DC.

From 1901 to 1903 cartoonist and author James Thurber lived with his family in Washington. He wasn't yet a cartoonist or author, he was mostly a small boy, who'd been born in Columbus Ohio in 1894. His father, Charles Thurber, had moved the family to DC when he was hired as a stenographer to a Justice Department commission headed by an Ohio congressman, and the Thurbers rented a house on I street in Washington. The hot summers and thick humidity DC is known for prompted them to rent a second house out of town for the month of August in 1902. They picked one at 319 Maple Avenue in Falls Church, VA, away from the city heat.

The house had a large yard with apple trees and pear trees, and a hedge around it, a good yard to play in for James and his brothers William and Robert. One Sunday afternoon, William was fooling around with a toy bow and arrow set, and he told James to stand over by the fence and he'd shoot him in the back with one of the rubber arrows. William took his time lining up his shot and James got impatient and turned around just as William let fly. The arrow struck James square in the left eye. His mother took him to a GP who dressed the eye, which hurt some but wasn't bothering him too much. But several days later it seemed to worsen and she took him to an opthamologist who recommended the eye be removed immediately.

The accident eventually caused Thurber's blindness later in life and he blamed the lack of more immediate drastic care for the effect it had on his right eye. And the accident profoundly affected his work, as he drew larger and larger and used ever thicker lenses to make sense of the visual world.

If you leave my house, drive about a mile and a quarter down Lee Highway and turn right on West Columbia Street, then left on North Maple Avenue, you'll come to a dead end street called James Thurber Court.The name of the court is thanks to Mrs. Elizabeth Acosta, a Thurber fan from Falls Church who struck up a correspondence with him in the late fifties, during the course of which she discovered that she was living in the house next to where he lived as a boy in August of 1902. When 319 Maple Ave. was pulled down in the early 60s to make way for townhouses, Mrs. Acosta pushed for the newly created cul-de-sac to be called after its most famous previous resident. 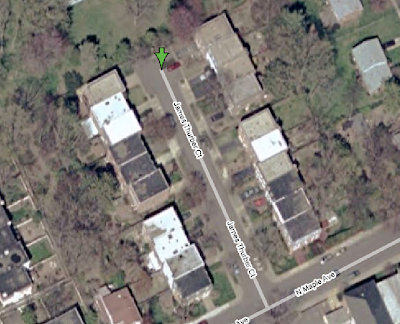 I'm going to walk over there some day this spring and take a photo of the street sign, but I'll keep my head down. Sounds like a dangerous neighborhood.

My thanks to Bob Burnett for telling me about this.
Posted by richardcthompson at 5:25 AM

Labels: my neighborhood and welcome to it.

Cool. I'm a Thurber fan just down the road in the Annapolis area; I'll have to make a pilgrimage out to James Thurber Court one of these days.

I think we should start holding regular comics get-togethers there in the cul-de-sac. It is a CUL de SAC, right?

I think we should all meet there for a seance. And there's a good Irish pub a coupla blocks west, too.

The Four Provinces on the corner of Lee Highway and Route 7. It's not bad. There are suddenly about four Irish pubs between Rosslyn and Clarendon. Let's go on a pub crawl!

Wow!!! I said it there, I see it here! PS: I'll forward the post to the Acosta family (many live in FC) and try to get you a copy of Mrs. Acosta's "Why I Love James Thurber" essay which was publish in Look or Life or something like that.....

PS: Falls Church is an indy city, not part of Fairfax Cty. And count me in for the pub crawl. --BB

A pub crawl with a James Thurber theme? Man, I'm missing out. You know, they've got some great pubs in Portland, too...and cul de sacs, too.

Thanks again, Bob, I'll fix the county/city thing. You are the Man To Go To. And please do, for a pub crawl the more the merrier.

And Kid Shay too. I see no reason why we need confine a pub crawl to the eastern US.

Hi richard...
I'm so crazy about your drawings.
So free and fresh line...
I'm not a collectionnist , just a cartonnist , but i wanted to know if you'd sell one of it...
A simple one , in black and white...
Tell me , and congratulation!

Merci, Guillaume. I'd be willing, let me know which one.

Ok richard , thanks so much...
So i'm waiting for impatiently.

Oh man - Falls Church. Better watch your back! Lols - FC stands for Frequently Calm and Forecast: Clear. I too recently learned about Thurber's brief appearance in FC, and I can't help but imagine a Walter Mitty wandering down Broad Street.

Oh man - Falls Church. Better watch your back! Lols - FC stands for Frequently Calm and Forecast: Clear. I too recently learned about Thurber's brief appearance in FC, and I can't help but imagine a Walter Mitty wandering down Broad Street.

Thanks for posting the story, the letters and the Saturday Evening Post article. My wife and I and a friend had dinner with Rosie Thurber in South Haven MI on Thursday, June 30. She is a delightful woman and a superb conversationalist.

I asked her about the Falls Church City connection. She said she had no idea. I will be forwarding the posting to her along w/ a photo of the James Thurber Ct. Street sign.