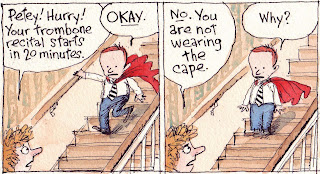 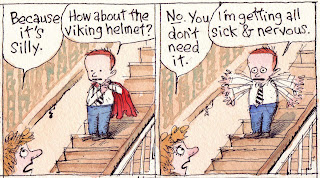 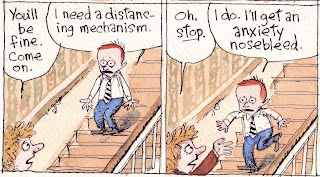 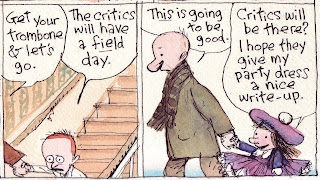 Posted by richardcthompson at 12:48 PM

Labels: sackbuts are even funnier, you could've made a joke about cul de sackbut

This is so good it's making me sick in my stomach. In the good way. Although, as a relatively new reader, it pains me deeply that there are pre-me Cul De Sac strips that I cannot read. Similar to the pain of not being able to look lovingly at a Cul De Sac book on my shelf. Ouch! All this pain!

Actually - Richard owns the rights to them. How about a book, Richard?!

Actually, the trumpet is the most extroverted of the musical instruments.
My fiancee is an elementary music teacher and and can generally pinpoint, with uncanny accuracy, what personality-types go for which instruments. And while I don't remember the specifics, I'd say trombone seems like a pretty good fit for Petey.
I'll have to ask her about the oboe.

Check it out. My imaginary hometown loves Cul de Sac?

Dustin! I've got book deal working for the syndicated stuff, the rest may follow. Or I'll just slowly post it all here. Or hello Lulu.com. Did you work with them, Mike?

Josh, that must be true about the trumpet. But the trombone does have the slide, and it's used for the big loud stuff in a symphony. How does your fiance define oboists, can she pick those? How about tuba players.

Billy O, thanks for the good news from your imaginary hometown! It's nice to have the imaginary community in my corner.

As an oboist, I'm thrilled. We are introverts, to be sure. We are also somewhat neurotic.

I've never seen your series (I don't get a paper) but now I'm dying to read it!

the cape! I love the cape!

Trombonists, it turns out, are laid-back types who mostly keep to themselves. They can be a bit egotistical but not overtly so; more of a quiet self-confidence. They're the foundation of any good big-band horn section; they know it and don't really care if the rest of the world doesn't.

Tuba players, ironically, tend to be small. And kinda nerdy.

In my experience, trumpet players tend to be five ten, about 217 pounds, balding, and private. But maybe that's just me.

When I played trumpet in high school, I could have used a cape. Every performance inspired sickness. If not in the audience, at least with me. Every trumpet should come with a distancing mechanism. (one year I dressed as Santa and played Jingle Bell Rock at a Christmas concert. Earlier in the evening I blew my lip, and under the beard I was playing with a blood blister. No one noticed, thanks to the Santa suit. I should probably wear the suit more often.)

I'd agree with Josh, that trumpets are designed for extroverts. Hunt up a video of James Morrison doing his six-gun trumpet spin. That's hard to do with a trombone. But unless you're a lead trumpet, you can live the dream of the shy lifestyle by playing in the third and fourth chair.

Mark ... I thought the trumpet was its own distancing mechanism...?

Sounds as though you and I are both exceptions to the "brash, egotistical extrovert" trumpet-player stereotype.

Though personally, I was never a very good trumpet player, and was more comfortable on the euphonium.

I had no idea what a trombone was. I was just there because I thought all the cool kids went to the band class.

Is that the same party dress that crinkled so loudly it nearly sent Petey to a mental institution?

Trombonists in my experience are generally the goofy fat guys in any ensemble. They're also entertaining bowlers and generally good drunks.

As far as being hard to draw, I have an advantage having looked down a slide for almost twenty years. For my money a good french horn is the true test.

You don't really work with Lulu.com - you toss stuff up and see how it sticks. It's pretty easy - the UPS is releasing a lot of comics collections through there now. I can give you a hand if you decide to go that route.

Wow, a record number of posts today! Must be the trombones.

Will now be waiting for the Cul de Sac book.

Gee, now I'll have to post the rest of Petey's trombone recital (yes, HereToday, you remember correctly). Patty, a horn player told me oboists are neurotic because they have to sit and make reeds ever day, and it awakens in them something obsessive.

I say this as a lapsed bagpiper, and bagpipers are wisely viewed as angry loners, even when they play in a band. Now I'm a mediocre mostly self-taught piano player.

So we've got a professional oboist, a triangle virtuoso, a brass section, a hunt-and-peck pianist and I'm sure the rest of you can sing. Let's start a band!

If Steve Gadd was a cartoonist, we'd be all set.

I also have a banjo that sits next to my drawing table. I'm trying to be self-taught, but it's slow going.

Might I sing instead of playing the oboe? I don't have a great voice, and I think viritual singing would work well for me. ;-)

Steve Gadd would be a great name for a cartoonist, too. It just sounds happy. But I think a bunch of cartoonists have been jazz musicians, like half the New Yorker guys are.

Jeez, I've got a banjo in my studio, too! It's a four-string tenor "Irish" banjoy my wife got me when we were married. I've learned one lick on it, and I know how to put new strings on it, and how to tune them. Or I did; it's been a while. I need inspiration. And time. And renewed powers of concentration.

Patty, you're welcome to sing. If it's virtual that's fine, that's the only kinda singing I'm capable of. In real life I can barely grate out Happy Birthday to You.