I think I've drawn Hillary almost exactly 419 times now, give or take, and I just drew her again for this week's New Yorker. It took me a while to get her face down, partly because she kept rearranging her features and her hair back when she was First Lady, but now she's settled on an appropriate face for public consumption. And I have too; here are few various Hillaries. 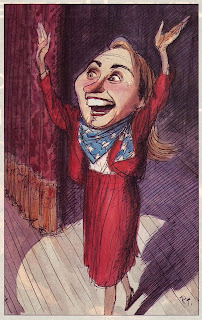 The above was for USNews & World Report back about 1995. It's Ebullient Hillary. 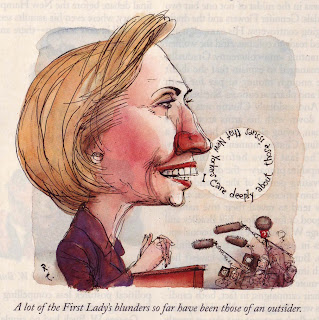 This was for the NYer when Hillary was running for the Senate. It's my favorite Hillary so far. 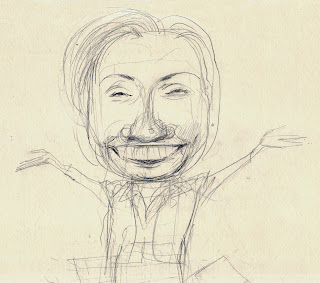 This is a sketch of Hillary I still like, done for no reason except I'd finally figured out how to draw her. 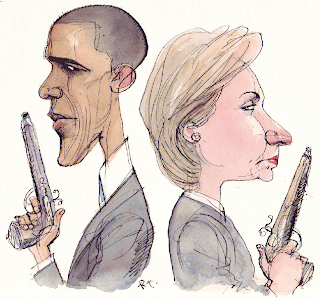 This is the drawing for this week's NYer. It was one of those jobs where the deadline suddenly shrank into a matter of hours as the piece was still being written. So it got a little too tight and careful, but it came out OK in the end, I think. And now seeing Ann Telnaes' masterly rendering of Hillary as something between Judy Jetson and Patty & Selma Bouvier makes me want to try drawing Hillary all over again.
Posted by richardcthompson at 4:34 PM

Ha ha! I think that Hillary herself looks different from appearance to appearance. That's the thing about running for office: you can't control your lighting. Didn't Maureen Down write a piece, years ago, predicting that Warren Beatty would never run for public office (which was a then-rumor) because he would not be able to control the camera angles and lighting?

The Jetson/Bouvier Sisters analysis made me laugh out loud, Richard.

I like seeing this progression. I'm terrible at caricature, so I'm always surprised to see how politicians are drawn by cartoonists.

When the drawing is published, it always seems so natural ("Of course! The big nose!"), but there's really no one way to caricature an individual.

I once drew a comic version of a Bob Dylan song (Isis), but my Bob Dylan came out looking like me instead.

I like them all. Obama's backwards glance in the bottom one is very funny.

I love Hillary's pursed lips in the New Yorker drawing. The thought bubble almost writes itself: "I can't believe they're making me go through this dog and pony show before the main event"

Well, it's about time you're posting again. That's all I've got to say.

Well, I liked the drawing too.

Beautiful, all of 'em.

And please note, this post does not constitute an endorsement of Hillary R. Clinton or her face.

that last one is awesome...