Gil Roth interviewed Sorel on Virtual Memories Show 462: Ed Sorel, and the two of them spoke briefly about Richard at minute 53:30 or so.
Sorel said, "There was one guy who worked like I did. We had the same methods of working, but he was every bit as good as I was. He was terrific. Richard Thompson. I only got to meet Richard Thompson once, and I kissed his hand. I thought he was just terrific. His stuff made you smile, just to look at the drawing."
If I recall correctly, Richard also visited Sorel at his studio when he was still a student, or just afterwards. I'm sure Nick Galifianakis can tell us for sure. Sorel is probably recalling the time in 1997 he had an exhibit at the National Portrait Gallery and Richard undoubtedly went to the opening talk. But perhaps they met elsewhere...
Richard mentioned Sorel twice on this blog.
Posted by Mike Rhode at 1:33 PM No comments:

The National Portrait Gallery  shares a block-size building with the American Art Museum, and it's one of my favorite places in DC. Before it was bought and renovated by the Smithsonian, the place was known as the Old Patent Office. It's built around a wide courtyard that's now covered by a stunning glass canopy, and each floor has large, airy galleries, and interesting nooks and crannies and hallways. And there are several cafes and an excellent gift shop (that you don't need to exit through). And, bless their hearts, in the part of the gallery dealing with presidential images there are several works by great cartoonists, including Pat Oliphant, Ed Sorel and Mort Drucker. There've been some great retrospective shows in past years by Oliphant and Sorel too.

So all that said, I'm not sure why I'm picking on it here. But it is sometimes more fun to make fun of things you like than things you hate.

When I drew this several years ago I remember not liking it much and now I'm not sure why. I wouldn't mind drawing Cul de Sac with some of the same grotesquery I got out of some of these figures, and someday I just might. And I really like the painting of G. Washington, who's always fun to draw.
In recent years they've had some excellent shows at the NPG, including a selection of works from the National Portrait Gallery in London and a terrific show of Saul Steinberg's work that I saw often enough that every piece is still stuck in my head. So if you're in DC, go visit the Portrait Gallery right now, no matter what this stupid cartoon says.
Posted by richardcthompson at 5:20 AM 5 comments: 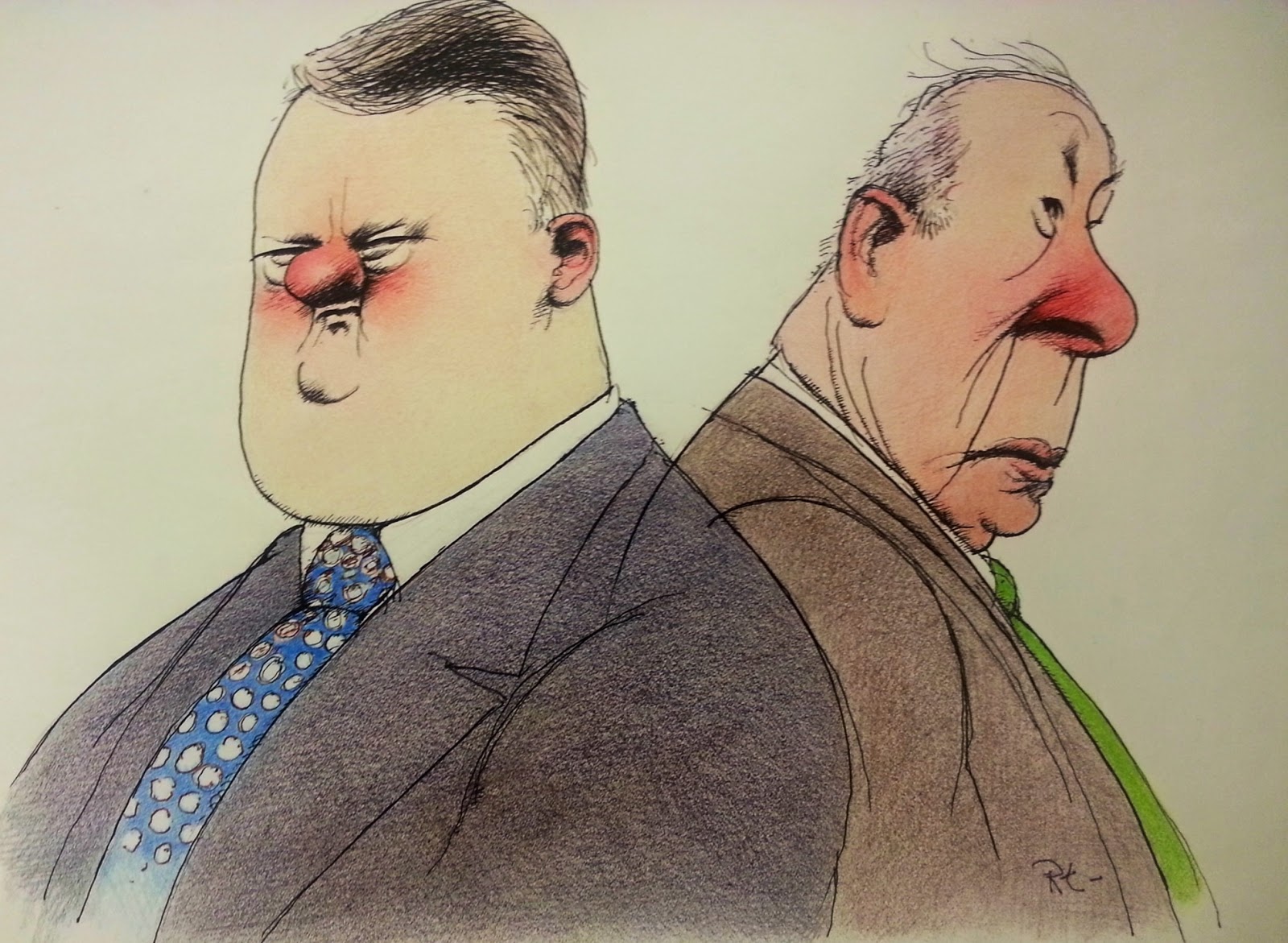 Here's an early caricature cover for the Post's National Edition to illustrate an article on Edwin Meese and George Schultz. I used to do covers for them fairly often, and this was the first, from about 1987-8. The National edition was (is?) a weekly tabloid that reprinted the week's stories, etc.; sort of like a magazine. And, for a cover like this, they'd pay the handsome sum of $200. So I was inspired. If it had been any more money, I'd've been worried.

In doing this, I filled two pads of my then-favorite paper, Bienfang Ad-Art, a translucent layout paper I liked before I started using a lightbox. At 100 sheets per pad, we're talking a serious emotional investment, probably due to inexperience and the kind of panic that hits at 4 a.m. when you've got a drawing due that day and you imagine a magazine with a blank cover  and your byline. (one guess what my reoccurring nightmare is).  My only clear memory of those two days (well, nights) is poring over works by Sorel, Steadman and other, better artists who knew what they were doing to see how to do it.

Finally, along about 4 a.m. on the second, penultimate night, something clicked. And after drawing these two bozos umpty-ump times it was probably my sanity. Suddenly, I had them both on one page. I added some colored pencil (enough to show it was supposed to be in color), Metroed down to the Post (from Gaithersburg, Md, where I then lived about 20 miles) and turned it in.

Later, this got into the Society of Illustrators' 2nd Humor show, and still later my brother was rear ended in Georgetown by Edwin Meese's limo.
Posted by richardcthompson at 6:42 PM No comments: