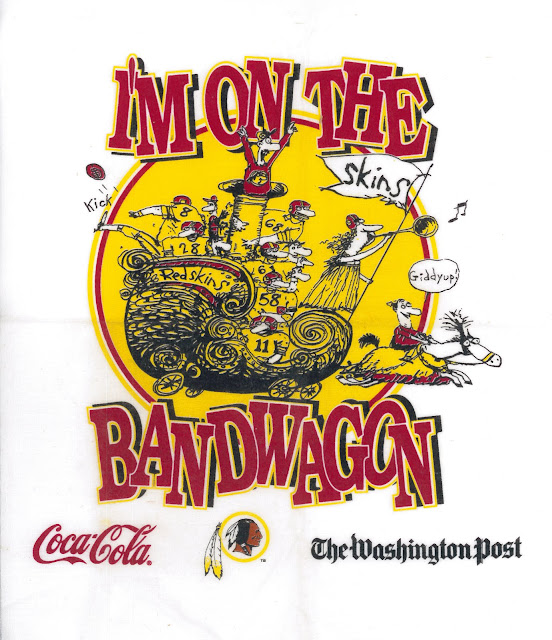 Richard did this "I'm on the Redskins Bandwagon" handkerchief in 1991 for Tony Kornheiser's Washington Post column.

Here's the relevant information from TK's Wikipedia page: "In 1991, Kornheiser created a string of now-famous Bandwagon columns to describe the Washington Redskins' Super Bowl run that year.[7] He started the idea when the Redskins trounced the Detroit Lions 41-10. He officially unveiled the first Bandwagon column when the team had an undefeated 4-0 record. From then on, the Bandwagon column appeared weekly. When the Redskins advanced to Super Bowl XXVI, Kornheiser and his Post colleagues Jeanne McManus and Norman Chad rode a handcar on a railroad track decorated as the Bandwagon for a 1,200-mile journey to Minneapolis, Minnesota. A Washington Post chat from January 26, 2012 has a picture of the artwork decorating an RV and quotes TK,“We had t-shirts made that we gave out with the great sort of drawings of Richard Thompson on the t shirts. We had handkerchiefs made — get on the bandwagon — whatever those things were. I have a t-shirt somewhere that’s mildewed and disgusting, and I have some of these handkerchiefs somewhere."
Posted by Mike Rhode at 8:40 AM