Bottom of the Bag 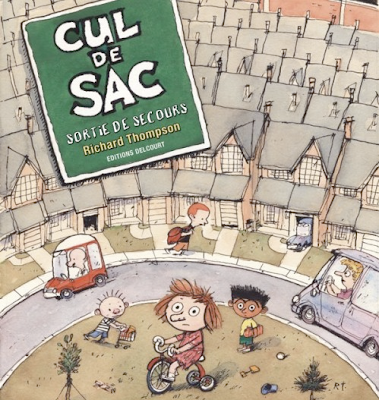 In Denmark they say "Blindtofte," while in Finland it's Pellonreuna. In France, it is known as "Cul de Sac," and I won't even try to pronounce that (I took French for two years in middle school, until the teacher suggested maybe I'd like to try another language, like German). But I can say it's coming out this month from the French publisher Delcourt. As this is the last day of the annual cartoon festival in Angouleme (see here, here and here), it seemed a good time to mention this. 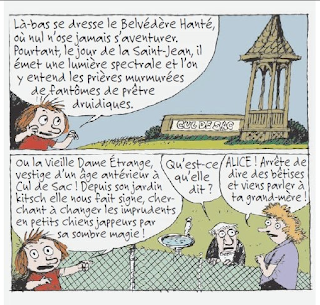 Posted by richardcthompson at 12:13 PM

Gee, I would have expected the French to come up with a more original name...

Judging from that sample, anyhow.

Merci, Dado! I ran it through Babelfish, and this is the result-

In the center of a suburban small island, encircled by the ring road, where large surface holds d' place; attraction, each one holds its role and the characters are well soaked. There is thus Alice, a four year old young girl particularly stirring up, his schoolmates of Merry Le Havre, his Petey brother, like his parents, Pete and Madeline. Richard Thompson, while sticking to the steps of Otterloop, a typical American family with in a banal manner daily suburban existence, asserts himself like the worthy heir to a Charles Schulz (Peanuts) or to Bill Watterson (Calvin & Hobbes). Following these glorious elder, Thompson puts in scene characters in situations of every day and ready of the human emotions with its animals. A simplified graphic grammar, children exchanging of the reflexions of adult: the receipt is tested. Still one needed a singular vision and a humour all in delicacy to dominate this consistent art requiring in a band from four to five horizontal labels, which, while forcing to condense it, gives all its intensity to the gag. The mixture is learnedly proportioned here. Richard Thompson carries a respectful glance on childhood, full of depth and tenderness. He as manages to exploit until the end the glance external of the child, to confront it with the reality of the world without however as this last has to undergo violence of it. The shift between the aspect of the characters and part of their speech functions with wonder, especially when he exploits the opposites: to childish gravity the shifted reflexions and at the very least eccentrics of the parents are often opposed. Alice seeks to include/understand the world which surrounds it and is not satisfied answers and an evasive speech that the adults hold to him. Sometimes even chooses it not to hold account, even if it means of it to draw from the hasty conclusions but O how much poetic. Bottom of bag offers several reading levels consequently and treats sometimes things which have to see little with innocence or the imaginary childish one. The small ones will be identified of course in Alice, largest will have fun dialogues or the comedy situation, will begin to think front of the parental condition, so that it implies in terms of responsibility, of educational role or will let themselves (a little) embark by the aspects metaphysics or existential. From this point of view, if one does not weary aphorisms of the guinea-pig of the class of nursery school, it is especially by its direction of the rate/rhythm and the narration that Cul of Bag carries adhesion. Thus, if each band is limited in oneself in its impact and if this one can be devastator, it is often the accumulation of the situations, their recurrence and the variations infinite which they authorize which start the first quiverings of the zygomatics. With the exercise, Richard Thompson excels and its visual semi humour semi cerebral is revealing of an acute sense of the human relations. It appears unceasingly with the mounting of new lucky finds and pushes its protagonists, with much distance and derision, at ends often as laughing as unexpected. The comic effect is still guaranteed, accentuated by the shift between simplified graphics and the improbable adventures. In some rough and nervous features, Thompson defines the pout, the attitude of the characters so as to support the narrative counterparts and sequences. Bottom of bag, it is the childish family strip with its best… and it is Bill Watterson which writes it: “All is there: intelligence, humour, tenderness, an amusing talent for the words and, more astonishing still, of the absolutely marvellous drawings”.

I've been expecting Cul de Sac to be released in French for a few weeks, and I have to admit I'm a bit disappointed :/
Your work, Mister Thompson is excellent, and it was lucky enough to get some advertisement, so that's cool.

Actually, the translation is a bit disappointing...
I'm not talking about the title, Cul de Sac is a good metaphor, considering where Alice lives etc etc...
Sometimes, there are some terrible translation mistakes that can be spotted (the kind of basic mistakes we've learned to avoid in the first year of University) and it is wasting (lightly!) your great work.
(don't mean to be nasty or to insult the translator, of course)

I hope the next volume will benefit a better translation.
Keep it up !

(funny to notice that I've been living in a town named Le Havre !)(nothing merry in the actual Le Havre, though)