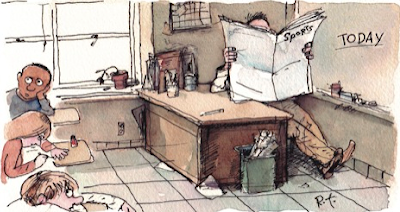 Here's an illustration I did for this week's New Yorker. The story's about the Rubber Rooms that the New York school department uses to stash teachers with various complaints against them, where they can stay for months or years, even till retirement. Some of the complaints lodged against them can be fairly mundane, usually involving negligence, but a few were pretty lurid. Like one who was falling down drunk in the classroom.

So this was the first rough I did, which was rejected as being too extreme. Understandably, as it's a little extreme, you know? 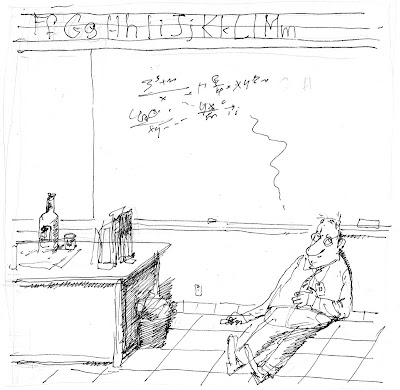 Here's the final from the second sketch. I cleaned it up some and photoshopped out some clutter on the desk, The size changed on the page, so they cropped it on top, mimicking the watercolor edge and lowering the word "today". Et voila, an illustration is born. Or made. 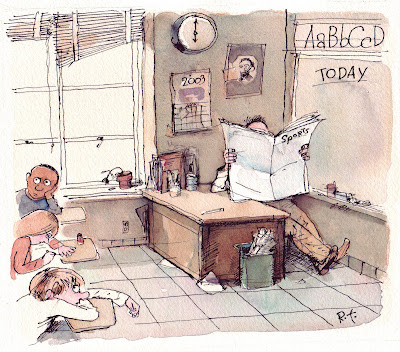 Posted by richardcthompson at 7:52 PM

Huh, they should've cut some copy and left your drawing alone. They cropped the venetian blinds & the wall clock? It's a school room for crying out loud!

Great illustration and an interesting article I imagine (I heard about these rubber rooms on This American Life, I think. What a waste of money and qualified teachers!).

I think I have that same wilty plant on my windowsill.

Richard, your work is simply amazing. I continue to be in awe.

Yowzah! This illustration fills me with middle school (which was called jr. high school when I was a lass) ennui. Good job… I think…
The NYSD Rubber Room as depicted on the TAL broadcast takes my fondest wish--that I could be paid while sitting around reading Erle Stanley Gardner and perfecting my macrame skills--and tosses it back in my kisser with interest. Sounds a lot like hell.

I wanted to comment on the washes -- great tonality and light, particularly on the newspaper, imo. Getting cropped is a drag, especially if the spec was given to you in a particular orientation; however, as a former AD, it's nice to have the option without losing the impact of the visual editorial... although the 6PM/6AM clock face would have thrown me. Do kids stay that late or get there that early?

The rubber room situation was engineered by Bloomberg and Klein. Yes, 700 problem teachers all suddenly showed up at the steps of the Tweed House in 2003 when the mayor took over the DoE. The portraited villains are more often than not the hapless victims caught up in a giant chess game played by the powerful.