About 17 years ago I got a call to do a cover for one of a series of Honeymooners VHS tapes. What made the job particlarly cool was that it was art directed by Lou Dorfsman (a legend in the field), the other illustrators doing covers were some of my heroes (Hirschfeld, Brodner, Burke...), the money was swell (they bought the originals) and coolest of all there was no deadline (within reason).

So they sent me the tape I was to illustrate, something about Ed Norton sleepwalking and dreaming about his dog. Unfortunately the tape was the wrong one, and I'd never watched much Honeymooners (though I'd seen the cartoons with the Honeymooner mice several times). But I found enough photos that I could fake up a scene okay; Norton sleepwalking, dreamed-of dog, and annoyed Kramden. Here's the first skech I did, just a quick one of Kramden & Norton. I like the Norton, though from the little pen mark over Kramden's head you can see that Lou Dorfsman chose the Kramden. This was back when roughs were exchanged leisurely with a client via FedEx, or carrier pigeon, or footmen with velvet cushions. However we did it, I eventually came up with a usable sketch. 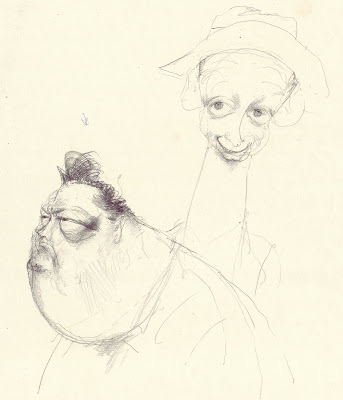 Here's the final, and the first thing you'll notice is that I slightly mismeasured the height, leaving some dead space between the focus of the illustration and the main type, but nobody minded. I did it in alkyd paint, which is somewhat like oil but it dries faster and it's a little more tar-like in consistency, and it's a little less aesthetically pleasing, if you're into that. Despite there being no firm deadline and despite the fast-drying quality of the paint, two hours before FedEx closed on the day before it was due I was down on the floor spraying the finished illustration with half-a-can of Krylon in hopes of forcing the paint to dry. I understand Norman Rockwell worked the same way. 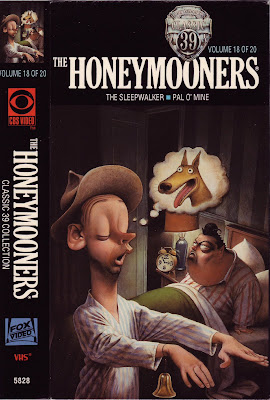 The last cool things about the job were that the original went into a museum in New York City, I forget what it's called but it's full of TV stuff, and when the complete series of VHS tapes was released Leonard Maltin showed several of the covers on Entertainment Tonight, and not only showed mine but said my name out loud on TV (along with Hirschfeld, Brodner, etc). That was when my career peaked. The most I could hope for now is a mention by Pat O'Brian on Access Hollywood, and who wants that?
Posted by richardcthompson at 4:52 PM

You are so friggin' amazing, Richard.
How many styles can you possibly have up your sleeve?

Tell me again why you chose to draw inside tiny little panels printed on horrid newsprint...

This was in a NYTimes article that said they wanted to make the place "more inviting." The next paragraph said "By no longer calling itself a museum, the center, which has buildings on West 52nd Street in Manhattan and in Beverly Hills, Calif., is playing down its archive of TV and radio programs and is recasting itself as a place for industry leaders and the public to discuss the creation of those shows and the role of media in society."

Well, there you go. How inviting can you get?

I have to echo Stacy's comments. This piece is gorgeous!!! You've got to show some more old pieces of this style. It's a treat for the eyes! Thanks for the big scan... you can really enjoy it!

I went to that exhibit back when it was called the Museum of TV & Radio and proudly showed episodes of STAR TREK TNG on the big screen. I love that cover and had no idea you did it, you chameleon you!

Do you miss the whiff of Krylon?

That is just beautiful.

Stacy, thanks! And as for your question, huh, I don't know. Suddenly I'm having doubts.

Mike, yes, that's the place. I knew it'd been through several names and I lost track of them along the way. It's still not inviting enough somehow. Maybe if they put in a bar.

Danny, thanks! I never did many of these things. I just don't have the patience to finish them.

Mike L, you've been there? Was there a bar? That'd be more fun than inhaling Krylon, I'll tell ya.

Brian, thanks! See you at SPX?

What a peach job. And evidently great inspiration for you, seeing what you came back with. Wow, wow.