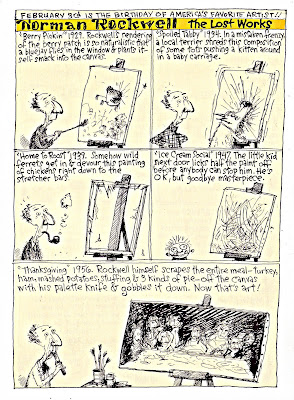 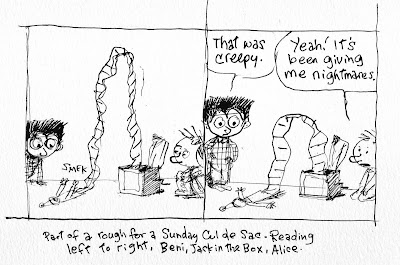 The strip for December 2nd is one of my favorites. I just liked drawing the rough, more than I liked drawing the final. Which is common; when drawing a rough the brain is in a relaxed, liquid state, the jaw is slack, and the hand moves easily. Drawing a final everything tightens up, neatness counts because, mistakes are made and worries form because, you know, People Will See This.

Here's a bit off the end of the rough skech for December 2nd's Cul de Sac. Actually, I did a previous quick rough for it I like even better; it's an almost incoherent tangle of lines. Somday I'll learn to draw cartoons by swinging a canfull of ink, like Jackson Pollock. I'll need a bigger studio.

Note: for some reason when you click on the image it downloads to your computer instead of merely opening in a new window. I don't know why. But please, consider it my unwanted gift to you, with all my best wishes for the Holiday Season.
Posted by richardcthompson at 9:32 AM 4 comments:

Today is of course the 172th birthday of Mark Twain, who's best known as a writer and author of such classics as The Celebrated Jumping Frog of Calaveras County, 1601, The Man That Corrupted Hadleyburg and the soon-to-be-produced-on-Broadway play, Is He Dead? And my favorite book, Life on the Mississippi. And some others.

A less well known part of Twain's output is his work as an illustrator and artist. In 1903 he wrote "Instructions in Art" for Metropolitan Magazine with his own illustrations, in which he set forth several novel yet cogent theories of Art. Here are some, mostly describing his struggles with technique. I've edited it a bit for space & format, but really, how dare I edit Mark Twain?

The figure (above) symbolizes solemn joy. It is severely Greek, therefore does not call details of drapery or other factitious helps to its aid, but depends wholly upon grace of action and symmetry of contour for its effects. It is intended to be viewed from the south or southeast, and I think that that is best; for while it expresses more and larger joy when viewed from the east or the north, the features of the face are too much foreshortened and wormy when viewed from that point. That thing in the right hand is not a skillet; it is a tambourine.

The next (above) picture is part of an animal, but I do not know the name of it. It is not finished. The front end of it went around a corner before I could get to it.

We will conclude with the portrait of a lady in the style of Raphael (above). Originally I started it out for Queen Elizabeth, but was not able to do the lace hopper her head projects out of, therefore I tried to turn it into Pocahontas, but was again baffled, and was compelled to make further modifications, this time achieving success. By spiritualizing it and turning it into the noble mother of our race and throwing into the countenance the sacred joy which her first tailor-made outfit infuses into her spirit, I was enabled to add to my gallery the best and most winning and eloquent portrait my brush has ever produced.

(Guest blogging by Mark Twain. Top that, Huffington Post. I couldn't find a copy of my favorite Twain drawing; a portrait of the Kaiser he sent unsoliscited to Harper's Weekly. It was of the same quality as the illustrations above, and with it Twain included several endorsements, including one purportedly from the pope, saying "we have nothing like it in the Vatican.")
Posted by richardcthompson at 7:54 PM 3 comments: