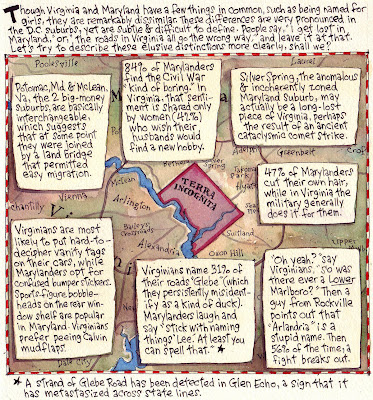 This was done about four years ago for the Wash Post Mag. The differences between Maryland and Virginia (the suburban parts around DC anyway) are many yet ineffable; everybody knows them but nobody can quite define them. And the Post Mag had wanted to do an issue exploring them, but it never happened, so I stepped into the breach just to muddy the waters.
I grew up in the outer Maryland suburbs, but I've lived in the inner Virginia suburbs for 16 years. So you think I'd be an expert, but as it is I still think of DC as being to my south, when it's directly east. On the other hand I don't get lost in VA like I used to, but going back to the first hand I don't leave the house often enough to have a chance to get lost.
Those of you familiar with the area will notice that Arlington is actually over about an inch to the right from what's indicated on the map. Everything else is entirely accurate.
Posted by richardcthompson at 4:31 PM

Labels: here there be monsters and commuters

East-West; I thought last time I was back there DC was still East of Arlington. And yes, I think metastasizing of roads should be a felony.

Whoops, I'll fix that. Thanks Hinzi. I blame my Maryland roots.

Another thing they have in common, according to the McCain campaign, most of the millions of people who live in these suburbs are "real Americans."

My best friend loves this comic so much that he's had it up on his fridge ever since it appeared in the Magazine. I am happy to be able to download it and preserve it in pixels.

That darn Glebe Road. Can't take your eyes off of it for a second!

Wow, this is amazingly accurate. You coulda been a real journalist!

As someone who has lived in VA for eight years and still has an anxiety attack every time I end up at the intersection of Glebe, Glebe, Glebe, and Glebe, this has long been my favorite.

As a lifelong Marylander who shudders at the thought of navigating the Glebes and 7 Corners, I love this cartoon! Is there any way to buy a high-quality print of it?