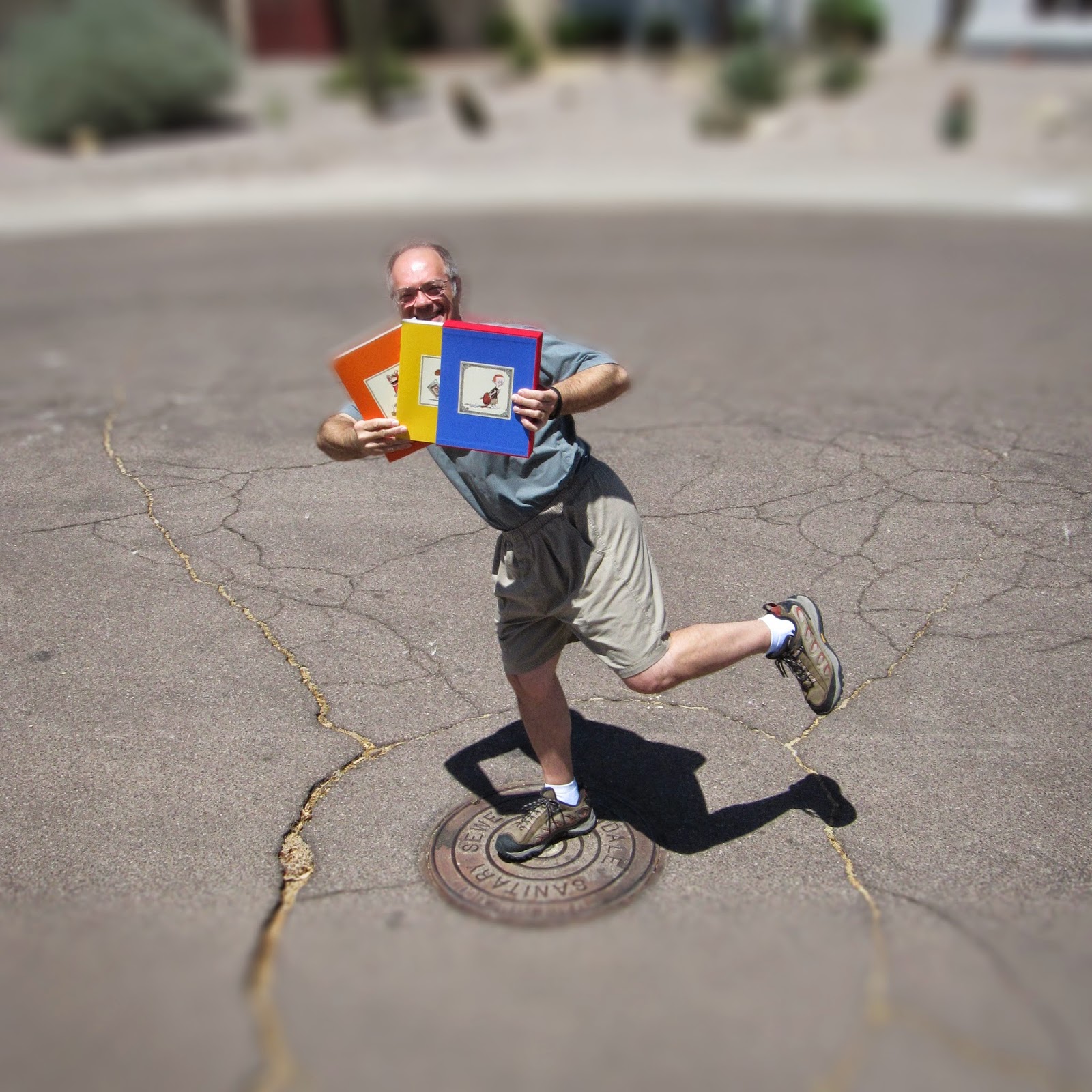 We have photographic proof that the well-known adult cartoonist Rick Kirkman has had an "episode" which has left him a virtual four-year-old. He is seen dancing around on a manhole cover holding some unidentified colorful  objects, possibly an explosive device. The landscape appears to be volcanic, leading experts to speculate he may have fallen, or been  pushed,  into  a caldera while playing tea party or maybe it was bath time.

Whatever, lock your doors.
Posted by richardcthompson at 3:41 PM 1 comment: 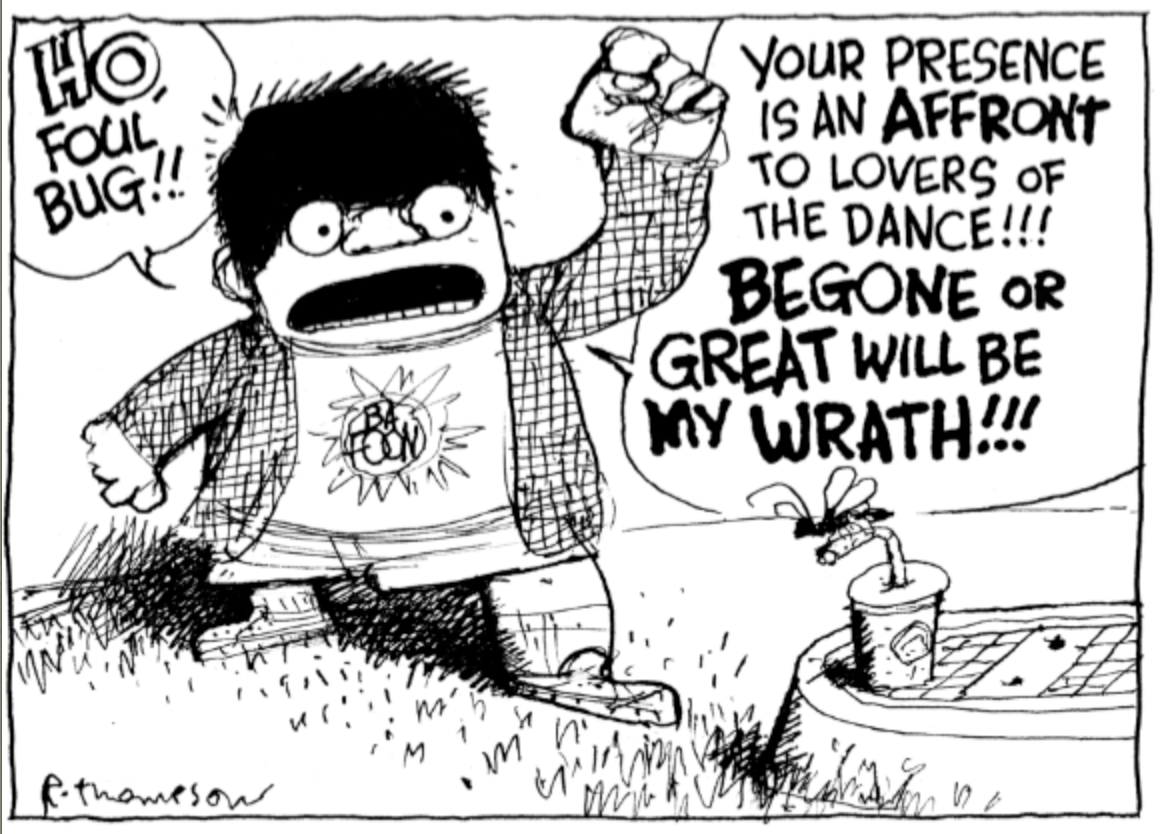 Character is a mystery. Someone said that the shallowest human being is infinitely more complex than even the best-written creation, so what's the use? I always scared myself off trying a comic strip because it seemed too difficult and incomprehensible. How could I build a water-tight character that'd walk off the page and respond in ways that'd surprise me? Then I'd see Walt Kelly do it with ease, and I'd want to punch him.

I think part of the trick is to start small and to work with opposites; Alice & Petey worked as foils because they were total opposites. I called them the Irresistible Force and the Immovable Object. Also, they liked each other, or at least tolerated each other; early on, they were more argumentative and it wasn't funny. Stand outside your own work when it seems to get too thick and it clogs up, y'know?

Petey Otterloop may have been my Magnum Opus in character design, as some would say, but he's really  a list of opposites with enough of me thrown in to make him hold together. He's the anti-Bart Simpson, the mirror image of cool. I even chose the name Petey because it 's got a finger-snappin', G-droppin' quality that's so alien... What can I say? irony's good for a laff..

No, where I think I got it right is in Petey's cohorts from Cartoon Camp; Loris Slothrop & especially Andre Chang (the connection to Andre the Giant didn't occur to me). Loris is kinda one-joke: she's fast and full of energy. But Andre has depth. They were designed out of necessity; Petey needed a milieu, he was surrounded by nothing but little kids and he needed somebody his own size to pick on him. I had to think-what would a friend of Petey's look like or be like? The same but the opposite. Large where Petey is small and loud where Petey'd be quiet.

I am absurdly proud of Andre.

Posted by richardcthompson at 2:46 PM 9 comments:

I drew this logo for the blog in 2008, a simpler time, before economic malaise, before newspapers were being sold to internet jackanapes, before my kids heard of X-box 360s, before Deep Brain Stimulation, before Cherrydale Rehab Facility, before Parkinson's or before anything bad had even been thought of,  and logos could proudly flaunt their black-and-whiteness because the designer was lazy.

So here's to Heroescon 2014, and all the heroes gathered in Charlotte this weekend. Wish I were there. 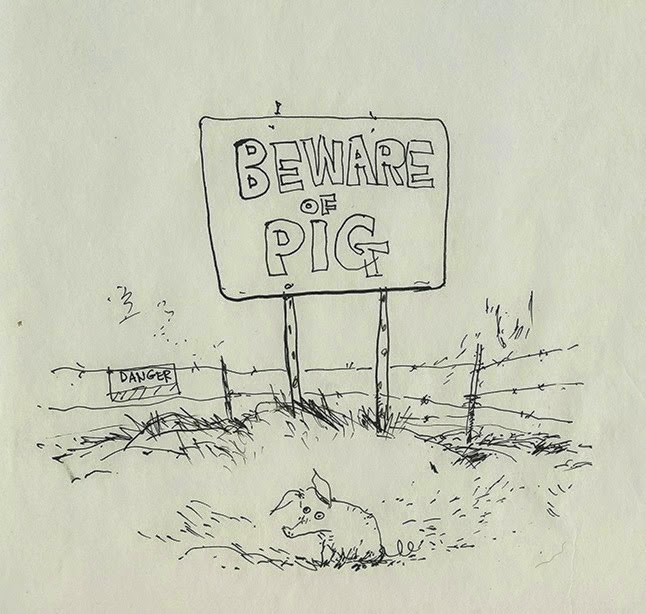 David Apatoff is a confusing guy;  one moment he's dressed like an undertaker and analyzing whether the accounting practices of a multinational organization satisfied the control requirements of the Foreign Corrupt Practices Act,  then suddenly he's posting some silly cartoon thing on his blog, Illustration Art.
Posted by richardcthompson at 5:03 PM No comments: 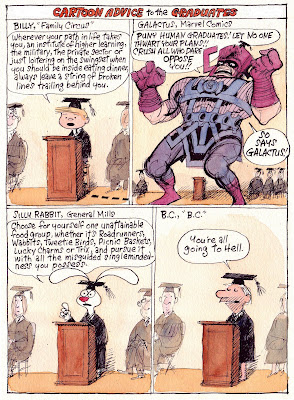 I've never been to a college graduation, but I've been to lots of high school graduations. This is one of my favorite old Almanacs and it's now up on GoComics. I thought of the BC joke first, although Galactus' mortarboard  makes me laugh harder.
Posted by richardcthompson at 12:09 PM 1 comment: 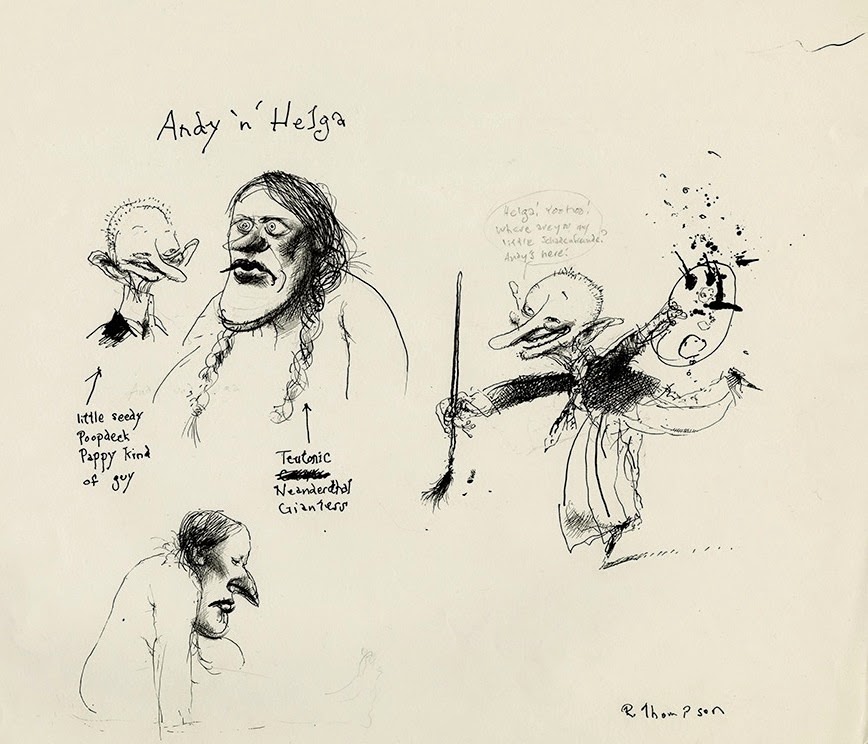 They're having a show at the National Gallery of some of Andrew Wyeth's calendar-ready brown paintings, so I went down for a quick spin through it with some friends. The gift shop was very tasteful. My friend Nick likes Wyeth a lot, and one of the visiting firemen with us was okay with him, though he preferred Jamie, the cute one. I've always had problems with most Wyeths, except N.C. So I drew this, but didn't know what to do with it, about 20 years ago. I still like it.
Posted by richardcthompson at 12:10 PM 4 comments:

Labels: This and many other lovely drawings will be in the Art of Richard Thompson available this Fall

Posted by richardcthompson at 10:33 AM No comments: